Writing About Witches by Jim Hartley

Witches ... ah, yes, I seem to have a thing for witches in my stories. I've been reading about witches pretty much all my life. Starting, of course, with Glinda of Oz. It has never worn off, and much more recently I own the complete set of DVDs for all eight seasons of the TV show "Charmed."

I even met a witch once. Well, she said she was a witch, and she was a very nice lady, so I guess I have no reason to disbelieve her. I never saw her cast any spells or anything, but who knows?

So when I got into writing, it just seemed kind of natural to do stories about witches. Of my ten e-book titles with MuseItUp, six of them are about witches: The Ghost of Grover's Ridge, This Wand for Hire, Magic Is Faster Than Light, Magic to the Rescue, Cop with a Wand, and the latest, Fortunatus, which can be found at MuseItUp Publishing http://tinyurl.com/l6uq4ts or on Amazon or B&N. Read Lin's very nice 5-star review on the book page. And take a look on my website at http://teenangel.netfirms.com for info on the others.

I just went back and counted short stories ... roughly twenty that deal with witches one way or another, including two that have the original Glinda from Oz in them. That's a lot of witches!

The story of how one of my books got written is very interesting. First, here is a short humorous flash piece about a witch who wanted to be an author, and was not above using magic to do it.

Megan didn't realize how loudly she had been chanting until her husband Phil poked his nose into her basement workroom. "Something wrong, Hon?" he asked.

"No, sorry. I was just casting a spell on this manuscript before I mail it in."

"Casting a spell on a manuscript? I never heard of that, what does it do?"

"This is my new story, and I'm sending it to Ultra Fantasy. They keep sending rejections, and I really want to sell something to them. Having something published in Ultra Fantasy has been my dream ever since I started writing." She paused, then licked and sealed the envelope, and inscribed a pentagram across the edge of the flap. "This is sort of a love potion mixed with a zombie spell. They'll never be able to resist publishing it,"

"I hope," Phil frowned, "that you know what you're doing."
#
Megan was a witch. In fact she was a very good witch. She could cast a spell or brew a potion with the best of them. But she'd been bitten by the writer's bug, she desperately wanted to write, and to see her writing in print.

The problem was that she was not a very good writer. Oh, she could spell, her grammar was good, her sentences parsed perfectly. It was on coming up with ideas that she was sadly deficient.

When she first started, she got a book on writing. It made a point of "write what you know," so she did. What she knew was witchcraft and magic, so that's what she wrote. She depicted the practice of magic in loving, painstaking detail. Too much detail. Much too much detail.

One rejection slip read, "Try submitting this as a 'How-to' piece for Popular Witchcraft."

Megan showed it to Phil and asked his advice.

Phil thought carefully about his answer, remembering once or twice when he had been frozen for a week when Megan didn't like his advice. Finally, he said, "Try branching out. Use a little magic, and some nonmagical stuff. Sort of cross-genre."

Megan tried his advice, but it didn't help much. Not only did Ultra Fantasy refuse to buy "Gunfight at the Orc Corral," but the story was also rejected by Lassos and Lariats.

And she was rather upset at some of the remarks made by the editor of Spaceward Bound when she sent him "Cauldron to the Stars," a tale of a flight to Tau Ceti. She had the spaceship able to exceed the speed of light by using a magic potion as fuel.

Oh, she sold a few stories to the quarter-cent-a-word markets, and to the pays-in-copies markets. But she got nowhere with the big magazines, especially Ultra Fantasy. She finally decided to cheat, and she cast a spell on her manuscript before sending it off.
#
Phil was watching football on the TV when Megan went out to get the mail. He hadn't moved a muscle when she came back in, so she stopped to check that she hadn't accidentally frozen him. But a quick look at the screen reassured her; it was the Giants-Jets game and he was self-paralyzed from trying to decide which team to root for. She went on down the cellar with the mail.

Her screams were enough to rouse Phil from his dilemma, and he went down the steps three at a time. Megan was sitting on the floor, tears streaming down her face. An open envelope was on her lap and the rest of the mail was scattered around. Something small and red, with wings, horns, and a tail, was buzzing around her.

"What's the matter, Megan? What happened? Are you OK?" asked Phil anxiously.

"Oh, Phil," she sobbed, "remember that story I put a spell on, so they'd have to buy it?" Phil nodded. "Well, they sent me," she sobbed harder, "they sent me ..." She batted futilely at the little red thing, and her voice rose almost to a scream, "They sent me a rejection demon!"

* * * *
Cute little story, no big deal. But you notice, since she was writing, I had to provide some fake titles. "Gunfight at the Orc Corral"! Right. Ridiculous. "Cauldron to the Stars." Yeah, sure. Er, ah, wait a moment ... "Cauldron to the Stars," a tale of a flight to Tau Ceti, the spaceship able to exceed the speed of light by using a magic potion as fuel. Hold on just a second. Damn, that's too good to use as a throwaway title, so I sat down and wrote the story. Witches on the spaceship, and the ship had problems, so they needed an FTL drive. Short story, 5000 words or so, and it was published in an anthology. Great!

Wait a minute ... that's too good an idea to waste on a short story ... ought to be good for a novel. Sure enough, sold it. But there was one problem, the publisher felt that if I used the same title for the novel as for the short story, it could be confusing. Had to get rid of that lovely title that started the whole thing off (sob, boo-hoo, sniffle) and the novel was published as Magic Is Faster Than Light. "Once upon a time there was a spaceship full of witches ..." And Magic to the Rescue is a sequel to it.

And by the way, I'm working on a couple of new stories ... would you believe, with witches? One of them, well, Lin's review of Fortunatus suggested she'd like to see more of Peggy Cassidy, the heroine, and I've got something going there ... tentative title, The Island of Dr. Merlot (I guess I'm sort of partial to wacky titles!). 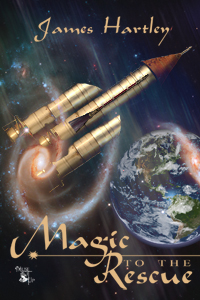 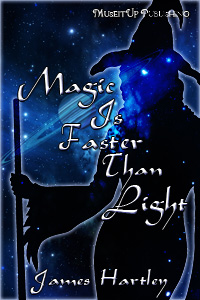