Tales of a Texas Boy Excerpt #14

TALES OF A TEXAS BOY
One Fine Dog

It was about a quarter mile across the pasture, so we’d have to walk on over to get them movin’. Pete, Mr. Braddock’s dog, would do most of the work, but even a real good sheepdog couldn’t move the whole flock all by hisself. And, we’d need to cut our own outta the flock. 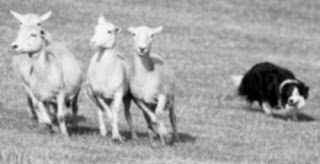 First, we’d have to figure out which were our ewes. We’d docked their ears with our mark, but you had to get close enough to read it. Since the ewes were skittish right after lambing, jest like moms everywhere, they worried about their young’uns. We were countin’ on motherly love to help us match the lambs belonging to our ewes.

Finally, Pa and Mr. Braddock were done talkin’, so we commenced to walk across the pasture. Pete knew what was up so he took off runnin’ toward the flock. The ground was still spongy with the spring rains, so it was hard goin’ for us. We squished along as best we could. I began to get the idea this wasn’t goin’ to be so easy after all.

Pete was near the flock by now and he started barkin’ up a storm.

“What’s got into him? He knows better’n that,” Mr. Braddock said with a puzzled look.

Then I saw what was gettin’ Pete so riled up. I pointed up and Pa’s and Mr. Braddock’s eyes followed where I was pointin’. A big golden eagle was soarin’ above the herd. He was circling round so it was clear he was lookin’ to take a lamb. The sheep got wind of him and started to get excited.

A flock of sheep on the move is like a school of fish. The front ewe turns one way and the whole bunch of them turn with her just like they were readin’ her mind. It’s quite a sight to behold. First they swarmed one way, then Pete came up to the flank and turned them the other. They were weavin’ back and forth across the field with Pete doin’ his durndest to head them toward the pens. We were helpin’ as much as we could with our boots stuck in the mud as they were.

Suddenly, the eagle nosed down and dove right for the sheep. He disappeared in the middle of ‘em, but you could see where he’d gone ‘cause the sheep at that spot were not only runnin’, but now they started jumpin’. So, if you can picture this, there’s this big wave of wooly sheep zigzaggin’ across the field with the middle of the flock eruptin’ like a wooly geyser. I didn’t know they could jump that high. I started to runnin’ for the flock to see if’n I could chase off the eagle, but the durned muddy ground tripped me up. I felt flat on my face after only a couple of steps. All I could do is watch.

The eagle took off again and he held a lamb in his claws. This near gave Pete a fit. After all, this was his bunch of sheep and no eagle was goin’ to take even one! Pete leaped up on the backs of the flock and jumped from sheep to sheep to get to the middle. The eagle was strugglin’ to hold on to the lamb, but hadn’t got much altitude; it was more than he could carry off easy. When Pete reached the middle of the sheep geyser, he jumped up himself and grabbed the lamb’s leg. Well, that was just too much for the eagle, so he let go of the lamb and took off.

Pete and the lamb came down and disappeared in the sheep wave. We just watched as there wasn’t a thing we could do.

The sheep started to slow down since the eagle was gone and pretty soon, Pete popped up in the middle of the flock and jumped out just like he’d jumped in.

“I ain’t never seen anything like that before,” Pa said, shakin’ his head.