Time for Another Excerpt. Here's #13

Fred and Frank Luck were identical twin brothers. They co-owned the farm inherited when their Pa died. Trouble was, those two hated each other somethin' fierce.

Pa turned to me and says, “Wanna go for a drive, Eddie?”

“Sure, Pa.” It was fine with me as I’d been cleanin’ out the chicken yard and anything’d be better than that chore. 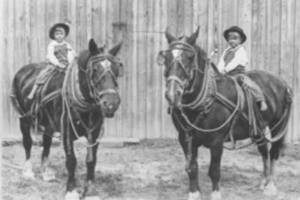 Pa and I pushed the Model A out of the barn and cranked her up. We jumped in and proceeded up the road to the Luck’s farm.

It didn’t take but a half hour to drive the six miles. When we were gettin’ close, we heard the sound of a shotgun firin’ off. As we pulled off onto the road leadin’ up to the Luck’s house, we heard shoutin’ as well.

Pa looked at me and says, “Be sure to watch close and be ready to duck down behind the truck.”
It made me a little nervous. It was well known Fred and Frank would go at each other just about anyplace they happened to be. Once, they both spent a night in jail when they got into a fist fight at the General Store. The Sheriff didn’t much care which one started it, so he just let them both spend the night in the pokey. He let ‘em out early enough to go take care of the livestock and didn’t do anything else.

Now, they pretty much kept their fightin’ at home. Most often they’d just flail at each other for awhile and then one or t’other would go off in a huff. Hearin’ gunfire made me think the feud was only gettin’ worse.

When we get up to the farmyard, we saw Frank, or maybe it was Fred, standin’ by the corral kind of hid behind a post and he was firin’ off shotgun blasts toward the granary. We could see the wood splinter as he fired. I glimpsed the other one, most likely Fred, around the side of the building.

“Frank, you cut that out!” Pa shouted.

“I ain’t Frank, Mr. Perkins,” the shotgun holder answered back.

“But, Mr. Perkins, that no-good brother o’ mine called me a dirty lowdown skunk. I can’t rightly take it without answerin’!”

Pa motioned to me to stand behind the truck bed and I went round as quick as I could. Pa started walkin’ slow toward Fred movin’ his hands in a placatin’ way.

“Well, I’m sure you two can work it out if’n you’ll just put the gun away, Fred.”

Then, Pa calls out louder. “Frank, come on out.”

“No sirree! I ain’t crazy, Mr. Perkins. That idiot will just shoot me if’n I come out,” Frank yelled, peekin’ round the corner of the granary.

While the talkin’ was goin’ on, Pa kept gettin’ closer to Fred until he was an arm’s reach away. He grabbed the double barrel of the shotgun and snatched it away and tossed the gun behind him about ten feet.

“All right, Frank, you can come out now. Fred doesn’t have the shotgun anymore.”

Frank come out slow from behind the buildin’ lookin’ hard to make sure what Pa said was the truth. When he seen Fred didn’t have the gun, he walked on over. He gets up a couple of feet away and he lunged out at Fred and grabbed him round the neck.

The brothers fell down on the ground and started wrestlin’ and screamin’ some pretty bad words.

“You yellow-bellied hornswoggler!” Whap! Fred hit him right back.

Pa stood there a bit with his hands on his hips. He looked to be ponderin’ whether or not to separate them. Finally, he bent down and grabbed both the Lucks by their collars and hauled them right up on their feet. My jaw dropped as I didn’t think Pa had it in him. He held ‘em both at arms length until they quit strugglin’, then he let them go.