Not All Tall, Dark, and Handsome Heroes are Human 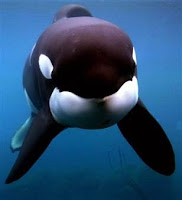 Heroes don’t need to be human or even a sexy male alien. When a witch’s power is speaking to animals, a hero can turn up anywhere, even in the middle of an icebound arctic sea.

I’ll let the whale tell his own tale.

Chchchchch skreak! That be hello in human people talk. My name be Salmon Hunter because I so good hunting the fish. My friend Kat Witch call me Salmon.

When I meet her for first time, I save her from a white tooth she say human people call polar bear. This first time, I save Kat Witch from sinking too deep in the ocean. I think she should learn swim better, but I not blame her since she without fins or flukes. Funny thing the whitetooth awake. Should be in den this season. Too early to wake up. I think some bad magic wake him up to kill Kat Witch. She says that's truth. A shaman, she says.

Other times I save Kat Witch when she in trouble. All these savings written in books, but I never learn to read human words. Besides, books get too wet in the ocean. Soon fall apart.

The others of my pod don't speak to Kat Witch. They be what human people call stuck up. Think they're too good to speak to her. I think it best thing ever! It like getting new toy. Orcas love play. Spend most of time hunting, but playing is important too.

She a lucky Kat Witch to have me be her friend. I think she die many times if me doesn’t save her. She say I be her hero. Me say I’m just Salmon Hunter, the smartest and best looking killer whale in the seas.

Someday I visit Kat Witch home. It island named Skeckkeeech. It mean witches’ home. It way north and hard to find, but Salmon can find anything! Salmon is a hunter, after all. Here be part of the story showing me saving Kat Witch's life for first time.

In a muffled voice, he exclaimed, “You can… You really can talk to animals!”

“Excuse me a moment, Mr. Orca,” she said to the big dolphin. She turned to Rune, her face lit up with a delighted grin. “I guess I can. But why so surprised? You were the one who suggested I could.”

Kat turned back to the killer whale. “I think it’s because he,” she nodded at the orca, “is a highly evolved being. At least, that’s what he’s telling me.” After a pause, Kat giggled and said, “Must be why you can’t understand him, Rune!”

Rune slapped a glare on her then suppressed a smile. “Very funny, Kat. So funny, I forgot to laugh.”

She chatted happily with the orca when several more huge black and white heads popped up through the gaps in the ice. Rune and Kat had to step back again as the ice splintered with sharp cracking sounds.

“Back up, Kat, back up,” Rune said. For the first time in her life, Kat heard fear in Rune’s voice.
“You don’t need to be afraid.”

“Orcas, then. It’s the ice breaking up. We could get dumped in the water.”

As if saying it made it true, the ice split once more. The crack exposing the frigid sea raced toward Rune and Kat. Before they could get traction to run, the ice floe created by the splintering tipped up and both of them fell into the water.

Kat’s parka filled with the icy water, and she sank. The sudden, intense cold knocked the breath out of her. She tried to claw her way back to the surface, but the weight of the parka kept dragging her down. Looking up, she could see Rune above her, thrashing toward the air. Blackness clouded the edges of her vision, and her struggles weakened.

Strangely, Kat felt warm. This is nice, she thought. Her arms floated out from her sides as she sank deeper.

Something big and black came up under Kat, and she rose up through the frigid water. She reached out with one hand and grasped a rubbery fin with all the strength she had left. The orca pushed her to the surface and shoved her out of the water. She landed face first on the ice. 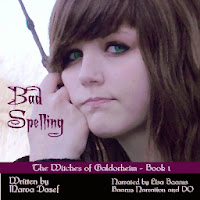