Today's excerpt is from my SFR, "Ultimate Duty." It's Space Opera, so don't be looking for big thinking. Like Star Trek, it does deal with future social issues based on today's growing power of mega-corporations. It's easy to follow a line into the future where all of us governed by an interplanetary corporation. It's also easy to believe the corp's in charge of everything wouldn't be particular beneficent. This is an old-time SF plot with good company in many very well-known dystopian genres of the 20th Century: 1984, Brave New World, a lot of Phillip K. Dick's books: Blade Runner, Total Recall, the entire Alien series, and, of course, Firefly.

Strong female leads used to be few and far between, however, the evolution of the science fiction romance genre has put women in the pilot's seat of the space transport, not serving cocktails to the crew. I could make a good case that science fiction was the driving force behind the kick-ass hero of the female gender. I recall Robert Heinlein's female characters to be the real force in many of his books--the women with which the putative hero depends to keep him alive.

Watching the first Alien movie with Ripley (well played by Sigourney Weaver) taking on an alien race almost single-handedly. One scene in Aliens (the second movie) is burned into my memory. Ripley is in the elevator going down to rescue the little girl. She's armed to the teeth, carrying multiple weapons, she's sweaty, dirty, not a pretty picture. But her face radiates determination. Fear and the will to overcome the fear. That's just it. Ripley was the embodiment of everything great about strong female characters. 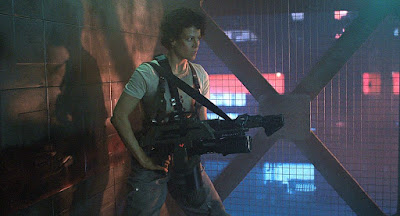 They don't need any man to save them from the tentacled beast, thank you very much. But they're not man-haters threatening the masculinity of the young guys who typically dote on science fiction (okay, remember this was in the 70s). Ripley was a new kind of woman. Strong, brave, but not arrogant like the male heroes are often portrayed.

Ripley was my role model for Remy when I first wrote a short story about her nearly 30 years ago. My other role model for Remy was my friend, Dawn. Six feet and red-headed, she was tough but enjoyed the attention she got from guys. So Remy is as brave and strong as Ripley, and as sexy and confident as my buddy, Dawn.

Remy and Garrett arrived at the outer wall path that led to the dock ports. Remy hoped at least one shuttle was still attached to the station. She dropped to the floor and peered down the slope of the passageway. Two guards stood at the entrance to bay 5. Luckily, they faced the opposite direction. Remy slid back and pointed silently, then held up two fingers. Garrett nodded and pointed left and then at himself. Remy nodded.

With no way to get any closer unseen, they must use speed instead. Both stepped back a couple of paces, so they’d hit the corner at full tilt. A nod from Garrett, and they sprinted through the twenty meters separating them from the guards. One guard turned to look only when Remy and Garrett were close enough to attack. The guard yelled, "Halt!" as he raised the barrel of his blaster. The second guard turned with a confused expression and didn’t manage to raise his own weapon before Remy reached him.

Remy felt her mind and body slip into fighting mode. Time slowed for her and she noted every detail of the guard’s stance. She leaped high in the air, her legs coiled like springs. The second guard finally lifted his rifle but never had the chance to fire. Remy drove both feet into his abdomen, slamming him against the wall with the force of her strike. In the low gravity she landed easily on her feet crouched and ready. She crossed her arms against her torso, grabbing the guard’s belt with her left hand and prepared to strike with her right. The man’s eyes widened when Remy’s backhand arced toward him. The force of the blow across his jaw sent him tumbling to the floor.

She glanced over at Garrett and saw he had already disabled the other guard, now curled on the floor moaning. Garrett kicked him in the head with an almost gentle tap. The connection of his shod foot on the guard’s temple did the job, knocking the man unconscious.

Garrett walked over to Remy’s guard and bent down. He pressed two fingers against the side of the man’s neck. "Good. He’ll live."

"If I wanted him dead, he’d be dead," Remy snarled.

Ultimate Duty
Amazon Kindle and Print (only $0.99 for ebook)
Smashwords all ebook formats (only $0.99 with coupon YG47Y)

A military officer must choose between her sworn duty or her rebellious blood ties.