Adventures in YA Publishing has a first two sentences contest a couple of times each year. It gives authors a chance to see if their work in progress will grab attention immediately. While adult literature does allow for a page or two to gain reader interest, middle-grades are a fickle lot. You'd better be able to hold their attention at least to the third sentence.

For grins and giggles, I entered the first two sentences of my totally uncompleted WIP. The title isn't even carved in talc, much less stone. Anyway, since this is the ONLY day those two lines will be seen in public, I invite you to check it out. All 50 entries are on the blog starting today (Feb. 11th) and readers have a chance to throw in their own two cents on the entries in the comments.

My entry is for the fourth book in the Witches of Galdorheim series. Besides the three novels, the series has an outlier short story about a popular character, Rune, the younger brother of the protagonist. Adult women are eagerly awaiting the cocky and cute vampire/warlock to come of age so they won't be too embarrassed at panting after a 14-16 year old boy. If Rune's book finds a way to complete itself, it will be added to the series. If not, then the reading audience have only themselves to blame. If they'd bought more of the books in the series, the fourth book wouldn't be so shy about joining the adventures of Kat the inept teen witch.

Here's my entry in the two first sentences contest.

Here's info on the rest of the series. Keep your eyes peeled. The 3-book box set will be on special in March. 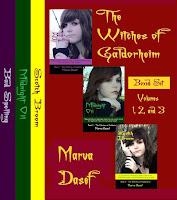 The Witches of Galdorheim: Volumes 1, 2, and 3 Katrina the teen witch with her half-vampire brother, Rune, brave crossing the arctic sea, being attacked by a polar bear, fighting giants, dodging magic attacks by an evil shaman, and that's just in book 1 of this trilogy. Complete in a single volume, follow Kat's adventures from the arctic circle to the Otherworld in Scotland.

Email ThisBlogThis!Share to TwitterShare to FacebookShare to Pinterest
Labels: Adventures in YA Publishing, Witches of Galdorheim