Don't miss out on the 99 cent special deal for this book from 2/22-2/29. Buy Strictly Analog at Amazon. Keep up to date on Richard's books on his website: Richard Levesque

When the World Is Wired, Sometimes You Need a Man Who Isn’t… 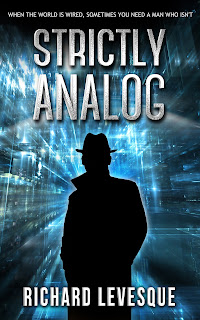 Welcome to the world of Strictly Analog, a world not too far in the future: California has split from the United States and is run by a corporate government; electric cars prowl the streets blaring customized drive tones; and everyone is constantly connected to the web. Almost everyone. Because of injuries sustained in California’s border war with Nevada, Ted Lomax is physically unable to log into the technological wonderland that surrounds him.

And that’s just fine with Ted.

How does one man survive in a wired world when he is unable to take advantage of constant connectivity? For Ted Lomax, the answer isn’t just simple: it’s simplicity itself. Like a lot of other people who are disadvantaged in one way or another, Ted lives a life without frills. His dwelling is a converted storage garage where his neighbors are scavengers and scroungers. Rather than connect through the high-tech devices that others take for granted, he uses a disposable pink phone that’s more suited to a fourth-grade girl than a jaded private detective. And when he needs to look up information, he does it the old-fashioned way—by going to the city’s one remaining library, jostling with the homeless and the hustlers in the sad stacks of forgotten books.

Of course, Ted does have other ways of getting information. He wouldn’t be much of a private detective if he didn’t. He’s got friends who are connected, friends like the handicapped hacker genius Philly and the eBay-savvy Angel.

Ultimately, though, Ted Lomax is on his own. It was making connections that got him into trouble eighteen years earlier when he slept with the wrong woman, a mistake that cost him one eye, his military career, and any sense of a future he might have had. Being on his own makes him more trustworthy to his clientele; they need someone who’s off the grid if they’re going to keep their sins from becoming public.

And that’s thing about the high-tech world of Strictly Analog—and maybe the high tech world we’re living in today. Information is everywhere; everything is public. The wrong pic on one’s profile, the re-tweet that reveals something unsavory about one’s likes and dislikes, the off-hand comment on someone else’s post that gets taken the wrong way—these are the kinds of things that have cost people jobs, scholarships, relationships...the list goes on. When it’s exposure that people in Ted Lomax’s world are worried about, they need a guy like Ted to look in the dusty corners and help them clean up the messes they’ve made.

Sometimes the messes are pretty bad, though. And there’s more than just dust in those corners. At times like that, it’s especially useful for Lomax to be off the grid. If he can’t connect, there’s no digital trail for anyone else to follow.

And it’s also a good thing Lomax only has one eye. It makes it just a little easier for him to look the other way…