These two books are based loosely on middle-eastern mythology. Don't freak out. This is MYTHOLOGY and has no references to Islam. These books have genies, demons, flying horses, and all those other fun and fantastical creatures you might have read about in 1001 Arabian Nights. 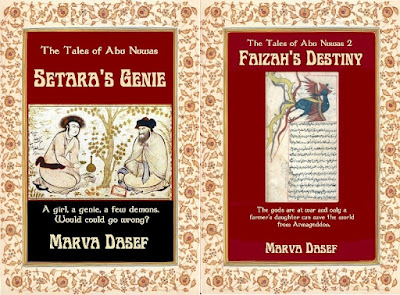 Tales of Abu Nuwas - Setara's Genie
A girl, a genie, a few demons. Would could go wrong?


He relates the adventures of the bored daughter of a rich merchant, Setara, and her genie, Basit, as they encounter the creatures of legend and folklore: a lonely cave demon seeking a home; a flying, fire-breathing horse who has lost his mate; a dragon searching for his family; an evil genie hunting for the man who put him in a lamp; and a merboy prince cast out of his undersea kingdom.

Tales of Abu Nuws 2 - Faizah's Destiny
The gods are at war and only a farmer’s daughter can save the world from Armageddon.