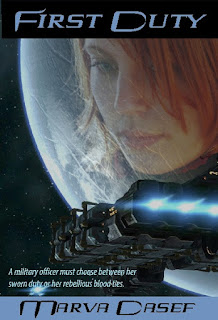 First Duty
A military officer must choose between her sworn duty or her rebellious blood ties.

Facing a life of drudgery on a repressive factory planet, Nyra Hutchings longs to escape. Her only option for release is to enlist in the Space Service, becoming a soldier for her own world’s oppressors.

She receives her first assignment: Guarding a charismatic rebel leader being transported to a prison planet.  When rebel troops surprise them, Nyra fails to thwart the ambush. Despite a commendation from her Captain, she feels she must redeem herself by recapturing the handsome fugitive.

Shocked by what she learns during the pursuit–her own family’s past involvement in the rebellion–Remy faces a dilemma: remain loyal to the oath she swore as a soldier or join the rebel cause and condemn herself to a death sentence for treason. What is her FIRST DUTY?