Borrowing a Box Set on Amazon

Read an entire series for free? What kind of insanity is that? However, if you're a Kindle Unlimited or Prime subscriber at Amazon, you know all about reading for free. So, how about using your super ability as a KU/KOLL know-it-all to borrow my series THE WITCHES OF GALDORHEIM. It's a KU/KOLL offering from Amazon.

Have you already read the individual books in the series: Bad Spelling, Midnight Oil, and Scotch Broom? Do me a favor and borrow the box set and do a leisurely flip through the pages so I'll get those valuable KENP (Kindle page reads) credits. At the end of each month, I get a small amount (like .0004/page) for pages read. That small amount can help make up for those who don't want to buy the box set because they've already read the books individually. Or maybe you have read one or two of the books, and would like to read the third without paying out any more money.

THE WITCHES OF GALDORHEIM
A KU/KOLL FREE BORROW ON AMAZON 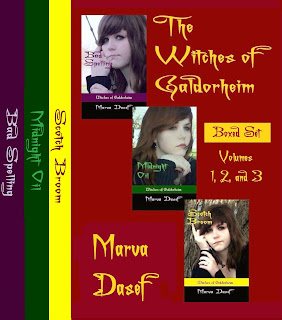 BAD SPELLING
A klutzy witch, a shaman's curse, a quest to save her family. Can Kat find her magic in time?
Follow the adventures of Katrina and her half-vampire brother, Rune, as they chase down an evil shaman. Dodging the shaman's curses on a dangerous trip across the ice-bound arctic seas, they meet both friends and foes. Kat and Rune must find the shaman and stop him before their beloved island home is destroyed.

MIDNIGHT OIL
Shipwrecked on a legendary island, how can a witch rescue her boyfriend if she can't even phone home?
Traveling with her newly-found grandfather, a raging storm catches them unawares. Kat is tossed into the icy seas, while her brother and grandfather travel on to find help. Kat is rescued by an unlikely creature, and Rune is captured by mutants. Only the magical Midnight Oil can save her brother, but an evil forest elemental is trying to stop her.

SCOTCH BROOM
A magical trip to Stonehenge lands a witch in the Otherworld where an ancient goddess is up to no good.
Kat is on her way to an exciting trip to a faroff land, but is led astray by a jealous rival. Caught in the Otherworld with a has-been goddess trying to kill her, Kat has to defeat the goddess and rescue her brother from the hag's clutches.