FINAL Free Day for TALES OF A TEXAS BOY

All good things must come to an end. Today is your last chance to grab the free ebook of Tales of a Texas Boy.

If you or a relative grew up in the 20's and 30's, experienced WWII as an adult, and is fond of stories set in rural America, this is a book they will enjoy. Also, it's available in a Large Print paperback and audio book for the vision-impaired.

These are stories about my father. He's passed now, but he took great pleasure reading his almost true tall tales. Many of the stories feature my grandfather, who Eddie looked up to and admired. I think you'll enjoy them too.

Large Print Paperback Amazon $8.99
Audiobook Only $1.99 on Amazon if you download the ebook

BLURB
How do you handle a crazy jackass? Eddie knows. If you ask Eddie, he'll tell you pigs can fly and show you where to find real mammoth bones. Take his word for it when he tells you always to bet on the bear. These are things he learned while dreaming of becoming a cowboy in West Texas during the Depression. Through Eddie, the hero of "Tales of a Texas Boy," we find that growing up is less about maturity and more about roping your dreams. Hold on tight. It's a bumpy ride. A wonderful read for anyone who enjoys books like "Little House on the Prairie" or "Tom Sawyer." A great bit of nostalgia for seniors, too.

EXCERPT
Out of the Chicken Coop

When I was just a little kid, no more’n seven if I remember rightly, I was down in the chicken yard tossin’ grain like I was tol’. This one little red hen started followin’ me around instead of peckin’ up the grain like the other chickens. I thought it strange, but just went about my business.

When I opened up the gate to leave, the red hen just whooshed right through ‘fore I could get it closed. I tol’ her, “Now you get back in there,” and opened the gate just a bit for her. She didn’t pay any mind to the invite, but just headed on across the yard as fast as two feet could take her.

I latched up the gate and took off after her. I thought I’d better grab her before she got up to the porch. Ma doesn’t like chickens on the porch ‘cause of the mess they make. So, I was runnin’ after the hen and she was makin’ a bee-line for the house. 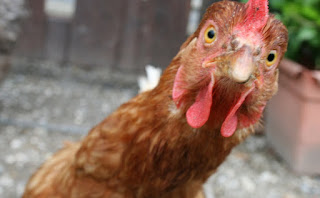 Well, she was faster ‘n me, so she beat me handy and up on the porch she went. The kitchen door was open to let the heat out since Ma was bakin’ pies. That hen just traipsed right in like she’d come to visit. I caught up with her finally and she and me went round the kitchen table a time or two. I was glad Ma wasn’t there ‘cause I know that hen wouldn’t of lasted two seconds if that were the case. I figured I’d better catch the chicken ‘fore Ma turned her into supper.

It were a standoff. I’d go right around the table, and the hen’d go left. I’d go left, and she’d go right. When I stopped, she stopped. Mostly, chickens don’t have much sense, which is why people don’t take to them much. Except for eatin’ and eggs, of course. But, I was beginnin’ to think this was one smart chicken.

I’d left the kitchen door open so’s I could chase the chicken out, but that just perked up Ol’ Spot’s curiosity as he come in to see what was up. Of course, Ma don’t allow no dogs in the kitchen, neither, so I’d two strikes again’ me already.

The hen didn’t care for Spot bein’ in the kitchen, neither. That’s one thing Ma and the hen would agree on. So, she gave out a couple of clucks and jumped up on a chair, which was shoved under the table. So, I got down on my hands and knees and crawled under the table. Spot thought this was a good idea, so he come under, too.

The hen spied Spot and Spot spied the hen and there was a lot less room under there after that. Spot jumped at the hen and she jumped over to another chair and Spot just followed her under the table. He’d pretty much forgot I was there, too, so he scrunched his way right over the top of me, pushin’ me flat to the floor. The hen’s jumpin’ from one chair to the next and Spot was runnin’ around in circles trying to catch her.

Read the rest in your free ebook copy from Amazon.