Huh? Amazon dropped the price on the paperback edition of "Midnight Oil." They could have mentioned it to me, but whatever. Take advantage of the deal while it lasts.

Shipwrecked on a legendary island, how can a witch rescue her boyfriend if she can't even phone home? 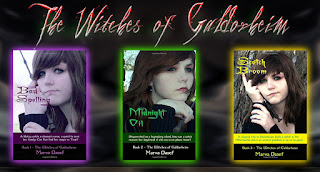 Kat is a nervous wreck waiting for her boyfriend's first visit to her Arctic island home. He doesn't show up, so she's sure he's given her the brushoff. When she learns he's disappeared, she sets out on a mission to find him. Things go wrong from the start. Kat is thrown overboard during a violent storm, while her brother and his girlfriend are captured by a mutant island tribe. The mutants hold the girlfriend hostage, demanding the teens recover the only thing that can make the mutants human again-the magical Midnight Oil.

Mustering every bit of her Wiccan magic, Kat rises to the challenge. She invokes her magical skills, learns to fly an ultralight, meets a legendary sea serpent, rescues her boyfriend, and helps a friendly air spirit win the battle against her spiteful sibling. On top of it all, she's able to recover the Midnight Oil and help the hapless mutants in the nick of time.