But you're gonna have to work for it. I'll be throwing some kind of contest or drawing just as soon as I figure out a good way to do it.

I've got 25 codes to get you BLOOD TIES TESTED free at Audible.com.

Of course, first priority will go to those folks who swear on the blood of their favorite cat they'll review the book at Audible or Amazon (reviews are shared once the ebook and audio book are related to each other). You can do that right now by email, comment here, comment on Facebook, or comment someplace I'll actually find your request.

It helps if you've already read or listened to the rest of the Witches of Galdorheim series, but each book does stand on its own. You can pick up the gist within the first few minutes/pages. To jog your memory, I've included the descriptions of all the books in the series below. All of the Galdorheim books are available in ebook, print, and audio book format. 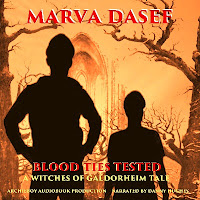 BLOOD TIES TESTED (Ebook at Amazon)
Unfortunate events lead a half vampire boy into indulging his vampire side, leaving him with regret and sadness. Can dear old Dad help him forgive himself?

SPELLSLINGER - Prequel Story Featuring Rune
What does a teenage half-warlock, half-vampire do to have fun? Why build an old west town on a glacier in the Arctic? There he can play at being the good guy sheriff up against mean old Black Bart. That it will go horribly wrong is a given. But how does Rune get into and out of the predicament?