Under the Deep Blue Sea

Get SETARA'S GENIE for only 99 cents all this month at both Amazon and Smashwords.

I like to use any mythologies which might coincide within the same time frame. That is, Celtic myths probably shouldn’t be mixed up with Greek mythology. But the ancient middle-eastern myths that predominate Setara’s Genie easily coincide with Greek myth. That’s why I feel fine with having my middle-eastern heroine go to the bottom of the sea and meet up with Poseidon and his wife. 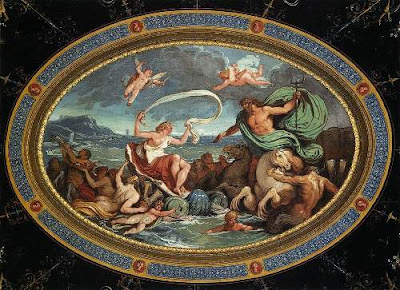 Poseidon
Poseidon is a god of many names. He is most famous as the god of the sea. The son of Cronus and Rhea, Poseidon is one of six siblings who eventually "divided the power of the world." His brothers and sisters include: Hestia, Demeter, Hera, Hades, and Zeus. The division of the universe involved him and his brothers, Zeus and Hades. Poseidon became ruler of the sea, Zeus ruled the sky, and Hades got the underworld. The other divinities attributed to Poseidon involve the god of earthquakes and the god of horses. The symbols associated with Poseidon include: dolphins, tridents, and three-pronged fish spears.

Amphitrite
The queen of the sea, variously given as the daughter of Oceanus and Tethys or of Nereus and Doris. When the sea god Poseidon wanted her as his bride, she declined the honor and hid from him in the Atlantic Ocean. A dolphin not only located her, but also brought her back to him, and he married her. The dolphin was awarded a place in heaven. Their son is the fish-man Triton. Amphitrite was portrayed on Greek amphoras together with her consort, riding in a chariot pulled by sea creatures (see above), or sitting on a sea creature, surrounded by Tritons. She is decorated with the attributes of a queen, her waving hair covered with a net, and sometimes with the pincers of a lobster attached to her temples. The Romans referred to her as Salacia.

The name means something like “The third one who encircles (the sea).”

This adventure has Setara helping the merboy, Dolph, find his true self. Nasty old uncle, Terrapin, paid a seawitch to toss Dolph out of the sea. With amnesia, he’s taken in my a rich man and made the stableboy. Considering that his father (Poseidon) is the god of horses, he fits in nicely. Setara first meets Dolph on an adventure in which she is made a slave by pirates. But that’s another story. The second time, she and Dolph meet, he has come to Setara’s home hoping that Basit (her genie) can help him discover who he is. With a good dunking in a demon pool, Dolph recalls some of his past life and they discover he is a merboy. He asks Setara and her friends to help him return to the sea.

Setara, Basit, and Kairev (the pool demon) help him to return to the sea where he regains his memory completely. The name Dolph is one given to Triton (Amphitrite’s only child) by his new friends. His real name in undersea language (think of the sound of dolphins) wasn’t pronounceable, so Setara continues to call him by the nickname Dolph.

Dolph must fight a duel with his uncle to regain his rightful title of Prince of the Sea. Of course, Amphitrite wants her son to win, but she's not aware of the the obvious fact that Dolph is falling for Setara, and vice versa. Amphitrite has a high-pitched voice (dolphin squeaks) and wears a crown of crab claws (sometimes depicted as lobster claws).

All the merfolk living within swimming distance of the palace gathered in the great hall to watch the duel. Mers sat on the wall seats, and others floated in the water above and around the dueling ring. Setara hadn’t noticed the ring before. The merfolk must have installed the inlaid mother-of-pearl circle overnight. She floated down to examine the ring, but it looked like it was part of the smooth, shell-covered floor. She wondered how they could have laid down the forty-foot circle in such a short time.

The murmur of the merfolk fell away when King Poseidon entered the hall from an archway behind the throne. He had changed to the normal size for a mer, about the height of a very tall human, or a medium-sized demon. His long fish tail made up most of his height, just like all the mers. He swam up to sit on his throne, which had shrunk to match his size. A lovely merlady wearing a crown resembling crab pincers joined him on a second, smaller throne. Dolph’s mother, Setara thought.

King Poseidon swept his eyes around the hall until they reached Setara. He beckoned to her. She poked an elbow into Basit’s ribs and tilted her head toward the king. Basit took her by the arm and swam to the throne.

Poseidon spoke, but his voice was no longer as loud as the booming of waves crashing on the shore. “Setara and Basit, may I present my queen, Amphitrite.” Setara bowed from the waist rather than attempting another underwater curtsey.

“I am pleased to meet the girl who saved my son. You, as well, genie,” the queen said in a high-pitched voice, the tone wavering up and down. Setara thought she heard a few clicks and whistles, too. The queen continued, “We will reward you before you return to the lands above.”

Setara shook her head. “Your Majesty, we want no reward other than seeing Dolph safe at home again.” She turned toward the ring. “I wish Dolph didn’t have to fight this duel.”

Basit’s pointed ears perked up at the word ‘wish.’

The Tales of Abu Nuwas - SETARA'S GENIE
A girl, a genie, a few demons. What could go wrong?


Abu Nuwas sits in the bazaar telling stories to the passersby he can tempt to pay. He relates the adventures of the bored daughter of a rich merchant, Setara, and her genie, Basit, as they encounter the creatures of legend and folklore: a lonely cave demon seeking a home; a flying, fire-breathing horse who has lost his mate; a dragon searching for his family; an evil genie hunting for the man who bottled him; and a merboy prince cast out of his undersea kingdom.