Halloween is for Scottish Winter Goddesses

#FREE 10/20-10/24 SCOTCH BROOM
Break out of the same-old Ireland (not that Ireland isn't neat) and step into the Otherworld of Scotch legend and myth. Cailleach is less known than her sister Bride (Bridget), but she used to be the one with the real power. Now days, not so much. 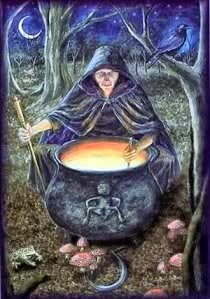 Living in the Otherworld after the Celts have stopped worshiping the old ones, Cailleach has let herself go to seed. She spends her days attempting to make sense of the hags’ potion in Macbeth (Double, double, toil and trouble). When she hears that a witch has come into the Otherworld, she begins to scheme. If Cailleach can only steal the witch’s magic, she can be young and powerful again. But the crone is cautious, she sends her minions out to learn more about the witch and to lead her to the goddess. While waiting for news, she learns that yet another witch has entered the Otherworld, but this one doesn’t make any sense. Cailleach determines this being is male, thus a warlock, but also smells of vampire. She decides to draw in this one like she plans for the first. But first, she decides to do a little homework.

She is a bringer of snows, death, and sharp storms. On Samhain the Cailleach leaves her mountains and walks the Land. The Cailleach then proceeds to "wash her plaid". Her plaid represents the sand. When the Cailleach is done the plaid is white and the Land is covered with snow. She is said to ride on the back of a wolf carrying a wand made of human skin, that she uses to strike down all signs of growth. Behind her follows cold winds, blizzards, and ice. In Scotland, she is also known as Beira, Queen of Winter.

SCOTCH BROOM: Book 3 of The Witches of Galdorheim
A magical trip to Stonehenge lands a witch in the Otherworld where an ancient goddess is up to no good.
#FREE to 10/24  Kindle: http://www.amazon.com/dp/B00JKR8XRG
Kat expects to have a great time on her graduation trip to Stonehenge. However, from the moment she leaves the witches’ arctic island, Galdorheim, she gets in nothing but trouble. Her younger half-brother tries to horn in on her trip, she gets lost in the magical Otherworld realm, is led astray by a supposed friend, then she has to confront a Scottish goddess who’s fallen on hard times.