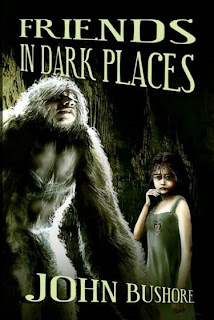 I grabbed up this book for a couple of reasons. First, I'm becoming familiar with the quality of publications put out by Sam's Dot Publishing and second, I've been following John's various publishing endeavors. What the heck? I thought. I'll get this trade paperback and give it a read. I had a few books ahead of it, so handed it over to my hubby to read first. By the time I was ready for it, hubby said he'd read the first few pages and wasn't grabbed up by the story. So, I read and stayed up too late, then read some more and stayed up too late. I went back to hubby and essentially told him he should try again.

This darned book keeps me reading well past my bedtime. Dang it! I hate when a book does that and I also love it. You know the feeling, I'm sure.

Okay, all that aside, let's give you a bit of synopsis. Brad and his buddies go off to the desert out of the small town of Tres Viejos, in the American Southwest. They're on a lark. Following an old treasure map, the teens are looking for Spanish Gold or whatever. It makes no difference, 'cause they're really just out on a kid-type adventure. Brad is forced to take along his younger sister, Becky, whom he hates in traditional teen fashion.

Things go wrong, seriously wrong, and Becky is abducted by what Brad describes as a 'monster.' Well, that explanation doesn't get very far, but Becky is gone and Brad feels guilty for not following the ghost-like gremlin into dark places.

Twenty-some years goes by and Brad comes back to Tres Viejos on the unhappy errand of burying his parents who have died in a car accident. He makes friends with a young woman he knew slightly in high school. Jenny and he warm to each other and things are going along well until the same monsters of his childhood snatch Jenny's daughter. He runs off after the kidnappers across the desert, but loses them in the rocks and crags.

Returning to the truck where he'd left Jenny, he finds that she's gone, too. He calls the cops, but suddenly he's under suspicion of being the abductor. It seems that a number of young girls have disappeared and the local good-ol-boy Sheriff is convinced that Brad has been the perpetrator of his own sister's disappearance along with a string of other girls.

Brad is desperate to follow Jenny, but the deputy who arrives at the truck in answer to Jenny's 911 call tries to arrest him. Brad knocks the deputy flat and runs off to the desert. He'd snatched up Jenny's cell and calls his friend, Andrew, to come help him. He also enlists Wayne, Jenny's brother and a spelunker, to help out.

Well, enough of the plot because you need to read the book for yourself. John has built a mystery for the reader. Who are these strange troll-like creatures who seem to be grabbing girls for whatever purposes? How can Brad rescue Jenny and her daughter? Just where the heck have they been taken?

Throughout the narrative, the reader is taken into the world of ancient humans, caught in the dank underworld of caves. Turned into almost-alien creatures, the cave dwellers are both sympathetic and disgusting. Dang it! Those poor folk have been trapped underground for thousands of years. Kill them! Those nasty creatures eat human flesh. Yechh!

That's probably way too much to tell a potential reader. Trust me on this. John Bushore's book will make you feel Brad's desperation at being falsely accused, claustrophobic fear of dark places and underground dwellers. You'll have shudder moments and root for Brad to save Jenny from the monsters, while sympathizing with these poor, underworld creatures.

So, buy the book. Read it. Enjoy. So there. Here's where you can find "Friends in Dark Places." The Genre Mall