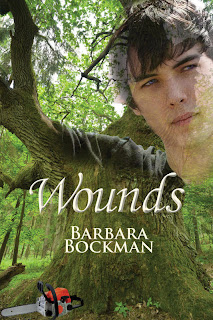 WOUNDS
A young teen boy struggles with his guilt and the ostracization his actions bring on.
by Barbara Bockman
MuseItUp Publishing

It’s nice to see how well the Muse young authors’ blogathon is moving along. I’m happy to be your guest today. Your readers can find me at my blog: http://barbarabockman.wordpress/ and on
Twitter @ babs22582. The buy link to my middle grade novel is: http://bit.ly/pjSEdC

I have been writing stories and articles for children’s magazines, both print and online, for about seven years. I have taken three courses with The Institute of Children’s Literature and I belong to three critique groups. I love to sit at my computer and type away, but even more than that I love spending time with my children and their children. “Family” tops my list of most important things in this world. This past weekend was especially joyful because we were celebrating the birth of Wounds.

I think you can tell by the books listed below who my influences are.

I would like to tell you and your readers about the way I chose the names of my characters for my middle grade novel, Wounds, published by MuseItUp Publishing.

Since there is a strong environmental angle to the story, I decided to use the names of prominent environmentalists for my characters; I mixed up given names and surnames. That applies to most but not to all of them. Mr. Bentley Ark is named for my elementary school principal, Mr. Bentley.

The main character, Craig, the boy who tries to cut down the huge oak tree, is named in honor of one of my favorite children’s authors, Jean Craighead George. I loved her My Side of the Mountain and most especially Who Really Killed Cock Robin?

The girl who starts out not liking Craig is named Carson. She is named for Rachel Carson, the lady who virtually started the ecology movement in the early 60s with Silent Spring, exposing the dangers of the insect killer, DDT. Silent Spring is both beautifully written and alarming.

This is the blurb in my library’s online catalog: "Silent Spring became a runaway bestseller, with international reverberations ... Even if she had not inspired a generation of activists, Carson would prevail as one of the greatest nature writers in American letters" (Peter Matthiessen, for Time's "100 Most Influential People of the Century").

The Ahhochee Hill Sanctuary in North Florida consists of 270 acres of land bequeathed to the Audubon of Florida in 2002 from the late Lisa von Borowsky an advocate for the environment. As the long-time steward of the property, Lisa believed that nature should be left alone to take its own course, resulting in many mature and old growth habitats. Lisa von Borosky is the inspiration for Mrs. Lisa Ark and also for Judge Borosky.

Mr. and Mrs. Ark’s son, Nelson, the sometime-friend of Craig, is named in honor of Gaylord Nelson, the Founder of Earth Day.

Dayton Hyde, the author of Sandy, is the namesake of my representative of the Florida Division of Children and Families, Mrs. Marjorie Dayton. Sandy, The Sandhill Crane Who Joined Our Family is one of the first (maybe, the first) look at how birds imprint and learn to fly by being taught by its “parent.” In Sandy’s case, the parent was Dayton.

On Amazon a fan said: “This is perhaps the best-written book I have ever read.”

Another reviewer said: “What a marvelous book! I laughed out loud when I saw the photographs of the author showing the cranes how to fly. A book for all nature lovers by a most gifted story teller. A book to read and savored and then read aloud. And to think it is nonfiction!”

The “Marjorie” part of her name is derived from Marjorie Stoneman Douglas, a journalist, writer, feminist, and environmentalist known for her staunch defense of the Everglades against efforts to drain it and reclaim land for development.

Mr. Bartram, the hardware store owner, is named for William Bartram who was one of the earliest naturalists when we were still a colony. He wrote an account of his botanical travels through Florida, Georgia, South Carolina, and Tennessee, Travels of William Bartram. One reviewer on Amazon said: “This book was a great achievement in that it was really the first work of American nature writing, and Bartram made a lot of great botanical discoveries during his journeys through the American Southeast.”

Marva, I could go on through almost my whole cast. But that might get tedious. I challenge your readers to guess the inspiration for the arborist, Logan Raxter. And remember, I will give away a PDF copy of Wounds to a lucky commenter when the tour is over.

Thanks again for hosting me on this blog tour and also for getting us started.

The youth group, K’BeTs, stands for “Kids for a Better Tomorrow.” One of the members is a cute, spunky girl named Carson. In the first excerpt below, the K’BeTs get permission from the forester to help with the tree. The second excerpt takes place after a shelter has been erected around the trunk of the tree, called the ICU.

“That’s a great idea you have there, Nelson,” Carson said.

“You convinced me,” Jean said.

“Yeah,” Shaquan said. “I wish I had thought of it myself. We can build a skateboard ramp for our next service project.”

“Hey,” Carson said, “aren’t you getting ahead of yourself, Shaquan?”

“Now, we’re through arguing,” Jean said. “We’ve all agreed that the tree should be our service project. Let’s go talk it over with Mr. Raxter.”

The K’BeTs rushed down the steps and sprinted over to talk to the tree man. “Hi, Mr. Raxter,” they each said.

“Mr. Raxter, we want to ask you something,” Shaquan said. “Can we help you with the tree?”

“What he means is,” Carson said, “we want the tree to be our service project.”

“I’m sure we can find something for you to do. You were a big help to me after Hurricane Daisy.”

Craig was astounded. That bunch had a lot of nerve! The tree was his project. Who invited them? He hobbled over to the tree.

Mr. Raxter seemed pleased with the offer of help from the club. “We’re going to have extra help, Craig,” he said. “And believe me, we’re going to need it.” He didn’t even give Craig a say in the matter. The prospect of working with that bunch of do-gooders put Craig in a glum mood for the rest of the day.

After walking around the tree several times, Mr. Raxter said, “I’ll let you guys know what to do as soon as I figure it out myself. Right now, I need to go to town to get some supplies.”

Mrs. Ark called the young people into the kitchen for lunch. Afterward, she insisted Craig get some rest before any more activity. Craig whistled for Siegfried, and as the two headed for the stairs, Craig heard Carson say, “I can’t see why Siegfried wants to hang around that Craig.”

The day after the ICU was completed, the heater arrived. The utility crew laid a special electrical hookup from the road and one of the electricians installed the heat pump. Everyone crowded into the greenhouse to watch Raxter throw the switch--Craig and Siegfried, Mr. and Mrs. Ark, Nelson and Carson. Lately, Carson often came home from school with the boys.

“That heater’s humming like a ’57 Thunderbird crusin’ down the highway,” said Mr. Ark. Everyone laughed.

After Raxter left, Mrs. Ark called everyone to dinner, inviting Carson along. Craig stayed behind. “I’ll turn out the light,” he said. He wanted to be alone with the tree. It was hard to say what he was feeling, because there were so many thoughts jumbled up in his head. Everyone had big hopes for the tree to survive the trauma. But why had they been put in this position? Why was everyone forced to work so hard? It’s because of me, Craig thought. Oh, I wish I could go back and undo all the damage. And he walked to the tree and put his hands on it the way he had seen Raxter do that first day. He let out a long, loud sigh.

When he turned to go in to dinner, he saw Carson standing in the doorway of the ICU. Her animosity toward him had blown away, and now her eyes held a softness he had not seen before. They exchanged a brief but understanding look before Craig reached up and pulled the chain on the hanging light bulb. Then they walked silently into the house.