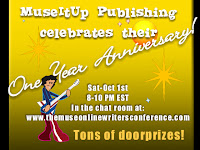 
MuseItUp Publishing celebrates their first year anniversary with a WOWZA 50% off Weekend Special. That's right, as of today until midnight on Sunday, MuseItUp would like to thank everyone for their support this past year by offering you 50% off any purchase. Just add the following code in the discount box in our bookstore's cart before you move on to Paypal:  MFAS2011
* You can buy my mystery, "Missing, Assumed Dead" for half-price with the code. Just sayin'.

And the MuseItUp On-Line Conference will be held (where else?) on-line on Oct 3-6. You'll find the chat room in the same place as the conference.
Nancy Bell is visiting me on 10/2 about her new release, "Laurel's Miracle." A donation will be made to a horse rescue facility for each book sold. Read all about it tomorrow.

A big Halloween blogarama runs all month long on Brynna Curry's website. Brynna is hosting a galaxy of spooky goodness, including yours truly on October 27th.

Introducing BAD SPELLING, Book 1 of the Witches of Galdorheim Series. I'll be the guest at a few blogs, and I'll be posting fun material here as well. Check my schedule page on this blog for the up to the minute links to my beloved hosts and the articles I'm including here. The "tour" runs from October 14th to October 30th.

A klutzy witch, a shaman's curse,
a quest to save her family.
Can Kat find her magic in time?
Beginning on 10/14/11 here and on host blogs.
If you’re a witch living on a remote arctic island, and the entire island runs on magic, lacking magical skills is not just an inconvenience, it can be a matter of life and death–or, at least, a darn good reason to run away from home.
Katrina’s spells don’t just fizzle; they backfire with spectacular results, oftentimes involving green goo. A failure as a witch, Kat decides to run away and find her dead father’s non-magical family. But before she can, she stumbles onto why her magic is out of whack: a curse from a Siberian shaman.
The young witch, accompanied by her half-vampire brother, Rune, must travel to the Hall of the Mountain King and the farthest reaches of Siberia to regain her magic, dodging attacks by the shaman along the way. Andy, one of a set of troll triplets, reveals his true identity.