Ever Have Something Really Bug You?

When I signed up on Google+ (which is, by the way, much better than Facebook), I met Lorinda Taylor. A retired research librarian, you can imagine she's pretty meticulous about research. She also writes very well. I was curious about her work which revolves, for the most part, around the concept of giant, sentient termites. If you want something to bug you (in a good way), I recommend her imaginative work She also draws her own covers. I invited her to provide a guest post. So, without further ado, here's Lorinda. 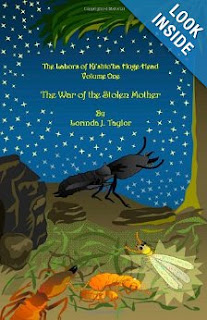 To date I’ve published two volumes of my fantasy series The Labors of Ki’shto’ba Huge-Head.  So what is this series all about?

At the end of my novel The Termite Queen, the Shi Champion Ki'shto'ba Huge-Head and the Remembrancer (i.e. Bard) Di'fa'kro'mi announce their intention of setting out on an epic journey to reach the sea. (The Shshi are an intelligent species evolved from alien termites). Until Kaitrin and the other Star-Beings arrived, the Shshi didn't know the ocean existed; it was only a Remembrancer's tale and the concept of an endless body of water fascinates them.

And how better to depict an epic quest than by having the questers relive Greek myths and certain other classic heroic tales as they travel across their world? And who better to experience these adventures but a Hercules stand-in? And which of my termites is a perfect fit to play Hercules? Ki'shto'ba Huge-Head, of course! The series title The Labors of Ki'shto'ba Huge-Head mirrors the Twelve Labors of Hercules, and several of these are re-enacted, although not all of them can be adapted to termite culture. But the primary myths that are re-experienced are ones that are not generally associated with Hercules, such as the topic of the first volume -- the Trojan War.

How can one of the world's great love stories be retold within a termite culture where sex has no relevance except within a fortress’s Holy Chamber, where the Mother and the King dwell? Well, if I told you that, it would be a spoiler! Suffice it to say, I came up with an ingenious way to make it happen! And it should come as no surprise that a tale of war fits well into termite culture -- one-third of the citizens of a fortress are Warriors, after all. And the themes of heroism and cowardice and betrayal, of friend turning against friend -- those are universal.

The opening chapters of The War of the Stolen Mother establish the premise for the entire series. We have to tie it to the end of The Termite Queen and then dispatch Ki'shto'ba on a quest to accomplish Twelve Wonders. And we need to identify Ki'shto'ba with Hercules by giving it the appropriate backstory. Hercules was sired by Zeus who paid a clandestine visit to Hercules' mother in the guise of her husband. Hercules had a twin and when they were both in the nursery, he wrestled with two serpents who were trying to kill the twin.

We also have to learn about certain prophecies regarding Ki'shto'ba that were spoken by one of the greatest Seers (a stand-in for the Greek Seer Teiresias), and we have to provide the hero with its archetypal twelve Companions for the quest. By the time Ki'shto'ba leaves its home fortress of To'wak, it has acquired four of them. The fifth soon appears -- one of the most important characters in the story -- Za'dut the trickster. Terrific character -- I love it!

Only then can we embark on the War of the Stolen Mother itself. Even as in the Iliad itself, there is plenty of action, mass battles, heroic single combat, trickery, prophecy, betrayal, funeral games, and ultimately catastrophe -- everything you would want in an epic fantasy! There is also humor, mostly provided by Za’dut.  Any reader who enjoys a uniquely imaginative depiction of this sort of story would love reading this book!
Now I'll quickly recap the remainder of series. Di'fa'kro'mi the Remembrancer, (the narrator of these tales) originally composed three volumes, but they turned out to be too long, so the editor Kaitrin Oliva (and me, by proxy) converted them into six. They divide easily because they're episodic.

Volume One: The War of the Stolen Mother
Already published on Amazon and Smashwords.

Volume Two: The Storm-Wing
Ki'shto'ba earns the new surname Monster-Slayer. It kills five monsters in this volume and encounters a different Shshi people (the Marchers) who will profoundly affect the lives of our hero and its Companions.
Already published on Amazon and Smashwords.

Volume Three: The Valley of Thorns
The Song of Roland and its disastrous aftermath. Enough said.
To be published this year, possibly.

Volume Four: Beneath the Mountain of Heavy Fear
Descent into the Underworld – absolutely essential to any epic quest!

Volume Five and Six: The Quest for the Golden Fungus
This is too long for one volume, but I'm uncertain as to how to handle the individual volume titles. Here’s a possibility:

Volume Five: The Quest for the Golden Fungus: The Companions Reach the Sea (tentative)

Volume Six: The Quest for the Golden Fungus: The Revenge of the Dead Enemy
The problem here is the length of the titles -- horrible for Amazon and not so good on a title page. If I drop the Quest part and use the subtitles as the main title, we lose the obvious association with the Quest for Golden Fleece (I'm sure you guessed that!) I'll have a lot of time to think about that.

And then someday I mean to write a seventh volume, because the end of v.6 leaves a lot of loose ends. It will be entitled:
Volume Seven: The Buried Ship at the End of the World.

Now all of this should make you quite eager to begin reading this series! If you like action and adventure, with great characters and some psychological angst thrown in, you're going to love The Labors of Ki'shto'ba Huge-Head!