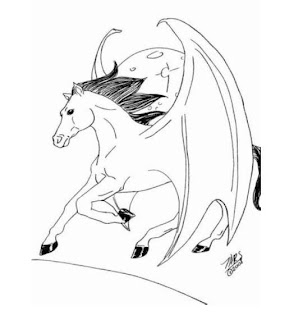 What does that have to do with myth and legend? Flying horses, of courses. In legend, Pegasus is a gorgeous black horse with ebony wings. Feathered wings. This has been the tried and true formula since Grecian myth. From the Encyclopedia Mythica:

In Greek mythology, Pegasus is the winged horse that was fathered by Poseidon* with Medusa. When her head was cut off by the Greek hero Perseus, the horse sprang forth from her pregnant body.
* Percy Jackson’s father does get around. A lot.

I’ve never been convinced that a winged horse would also have feathers. In “Setara’s Genie” I introduce not one, but two! flying horses.

Flying Creatures in Setara’s Genie (other than the genie, of course) 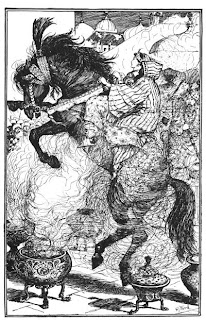 Setara finds a talking, flying, fire-breathing horse named Hasib hiding in her father’s stable. He’s trying to look casual, but Setara notices that he’s whistling and hiding his head in the corner of the stall. Highly suspicious behavior. When Setara approaches, an eagle flies through the stable at head height scaring the horses, including Hasib. He levitates a foot into the air and spits fire out of his mouth, setting the hay on fire.

Setara rushes to the rescue and beats out the flames. She and Hasib have a little chat while he explains that he’s a cross-blood horse, mostly horse, but just a wee touch of dragon blood. This means he can fly (without wings) and breathe fire. However, he’s not very good at either talent. Setara helps Hasib gain control over his magic.

After Hasib has headed back to the Sultan’s Palace (where he lives), Setara and her genie run across Azhi Dahaka, the dragon-demon which provided (unwillingly) the blood to make Hasib a flying fire-breather.

Trapped high atop a mountain, they watch while the dragon heads for the palace. From what he’d said before escaping from the caves (just stick with me here; I don’t want to give away every plot element), Setara and Basit believe the dragon wants to harm their friend, Hasib.

With the dragon attacking the Sultan of Semidor’s palace, Setara and Basit have got to get off that mountain fast. Basit gives wings to Setara’s mare, Nasreen. But we all know that horses don’t have feathers, so Nasreen’s beautiful wings are covered with the same lovely hair as the rest of her body. The little mare takes to her new appliances immediately, carrying Setara to the Sultan’s Palace to save Hasib.

There we have it. Two flying horses, one dragon demon, and nary a one with feathers. The flying horses shown here are from an old copy of 1001 Arabian Nights. You see? No wings, no feathers.

At the far end of the corridor, she saw Hasib with his head stretched as far as he could through the stall window.

“Here. I’m here!” Hasib slammed his front hooves against his stall door. Basit was within reach of the stall. “The groom locked me in and then ran off. I have to get out. I’ve heard Azhi Dahaka is here, and he’s burning people!”

Not taking time to use magic, Basit fumbled with the latch and swung the stall door open. Hasib stepped out, immediately turned left and trotted down the long corridor to the outside door. Basit, Setara, and Sheik kept pace with him.

“What will you do?” Basit asked.

“I’ll have to fight him, I’m afraid. I’m the only one who can. The blood of Azhi Dahaka runs in my veins.”

The four reached the door and stood looking up at the awesome figure of the dragon demon spouting flame. People ran screaming in all directions. The soldiers were having no luck with their arrows. Trying to shoot straight up to Azhi’s perch on the tower slowed the arrows too much to do any good. The barbs bounced off the dragon’s tough scales with no effect.

Setara saw a crossbow lying on the ground, probably discarded by an escaping soldier. She picked it up. A few feet further on, she saw a quiver with bolts. She grabbed it, too. “Let me on your back. I’ll go with you!”

Basit reached for her arm. “No! I cannot allow you to come to harm.”

She twisted away and jumped on Hasib’s back. “Let’s go, Hasib!”

The flying horse sprang into the air. He needed no wings since he flew by magic. To Setara’s surprise, Nasreen took flight beside Hasib. Setara admired the mare’s bravery but wished she could tell her to go back.

Basit also took flight. Setara knew he wouldn’t let her face Azhi’s flames alone. She hoped he knew some spell to protect her and Hasib from the spouting fire. Glancing at him, she saw the familiar look of concentration on his face when he was making up a new spell.

As the two horses and the djinn soared upward, some people stopped in their tracks to stare. Setara almost laughed. As if a dragon demon perched on the palace tower wasn’t enough, the sight of a winged horse, another flying horse with a girl on his back, and a genie was more than they could stand. Those who were not already running away from the tower decided now would be a good time to do so.

The ground around the tower was littered with fallen arrows and men. Some brave souls attempted to save the wounded men. However, the flames were pouring down so fast they had to weave and dodge to reach them.

She gripped Hasib’s mane with one hand and worked to load a bolt and get the crossbow in position with the other. It wasn’t working, so she let go of the mane, gripping tight with her legs. She didn’t even think about looking down. Her whole attention was focused on the roaring demon wrapped around the tower. They flew directly into the path of its flames.

Hasib fought back with flames of his own. However, he was much smaller than the dragon, and his flame was not big enough to have any effect. Setara fired a bolt toward Azhi, but it fell far short. “We’ll have to get closer!” she yelled over the roaring of the dragon. Hasib spiraled upward, taking a path around the tower. Azhi twisted his body to face the flying horses, the clearest threat to him.

Setara managed to reload the crossbow and turned the winch to draw back the bolt. She held the crossbow up, aiming along its shaft. The dragon demon’s head reared up directly in front of her. She fired. The bolt shot through the air, hitting the dragon’s head. It seemed to stick for a moment, then fell off. Setara groaned. She didn’t think she’d get another chance.

“My blood!” Azhi Dahaka cried out. Setara looked to see if the bolt had done some damage, but she couldn’t see even a scratch on the dragon’s shining scales. Of course, while Hasib circled and soared, getting a close look wasn’t easy.

She saw Nasreen turn in mid-air and begin to circle the tower in the opposite direction from Hasib.

“Good girl!” Setara called out. The mare was exposing herself to distract the dragon’s attention away from her and Hasib. The dragon twisted toward the mare and drew his head back to spray flames at Nasreen.

With the dragon’s attention elsewhere, Setara loaded another bolt into the crossbow and pulled it back. Hasib drew his legs up and shot toward the dragon. As he brought her next to the dragon’s side, Setara loosed the bolt. It bounced off his scales to no effect.

Azhi Dahaka’s snake-like head whipped around toward Hasib. His eyes widened as Hasib halted in mid-air right in front of the dragon’s nose.


Where to Buy Setara's Genie: