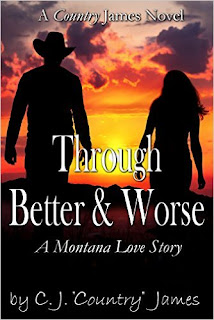 By C.J. "Country" James, a contemporary western romance unlike any of those lightweight know-nothing-about-real-cowboys romances.

Getting a boot in the door almost costs Jake Jarvis his life.  It does cost him two hats, some jail time, and a whole bunch of money.

But Dree won't see him for dust.

Guns, roses, and the flow of raw whiskey take them both Through Better & Worse.

Dree downshifted from fifth to fourth, but it wasn’t enough. Her old pickup just didn’t have enough guts to pull the hills, anymore. She dropped to third, losing momentum, and the truck’s speed stabilized at thirty-five. She put on her hazard lights.

Behind her, several cars came up fast and, after following for a minute, honked, then started weaving in and out across the center line, hoping for an opportunity to pass. One of the Aussie dogs sitting on the seat next to her whined and glanced back—Chip, the more timid one. Laddie, the more aggressive but smartest, got down on the floor. There wasn’t a turn-out where she could pull over to let the cars by on the narrow, two-lane highway, its asphalt crumbling at the edges of a non-existent shoulder, remnant snow berms still melting off over the steep drop-off into the ditch.

A semi passed going the other way, its wash buffeting the trailer enough that it swayed. White-knuckled, Dree fought the urge to over correct. She got to the crest and her pickup gained ground. She got it up to forty-five, then kept it there as she started the descent.

The cars behind her were piling up. Oncoming traffic was steady, though, and there was still no turn-out. There wouldn’t be until the bottom of the hill. Behind her, the line of cars was getting longer. And angrier, she guessed. Only half-a-mile to go to the bottom.

In the rearview, she saw a fancy, black RAM crew cab dive out into the oncoming lane from three cars back. Ahead, a car came around a curve. Then two more, another semi behind them. “Omigod. You fool!”

The pickup roared past her.

Panicked, she jerked the wheel just in time to avoid collision with the black truck’s rear-end as its driver dove for safety, nearly clipping her. Her passenger side tires caught the pavement edge and gravel. The trailer yawed, pulling her pickup’s back-end sideways. She hit the trailer brakes and prayed, her grip ferocious, painful, on the wheel. They were going over. Chip joined Laddie on the floor.

But they didn’t go over. They steadied. She swore. Fought hysteria, red-darkness rising. And she cursed the black pickup for his stupidity. “Jackass!”