A quiet, little adventure book, "Eagle Quest" has some surprises, twists and turns for young readers who'd like some adventure and danger, but aren't really into blood-soaked gore fests generally passed off as tween and YA fiction. Nor is there any sex. Yeah, a couple of the kids kind of like each other, but they're not quite ready for the whole girlfriend-boyfriend thing. Mostly, it's about friends, trust, and kindness. Buying for your kids or grandkids, but want to be a little on the conservative side about what your 10 to 13 year old reads? "Eagle Quest" might be just the book for gifting to your kid or grandkid. 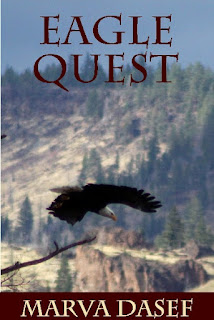 Fiona, Hap, Billy, and Mitch make an odd set of friends, as different from the usual high school crowd as they are from each other. Mitch, the oldest of the four, is a half-breed Native American, adopted by white parents.

Troubled that he doesn't know his tribe, he avidly studies Native American history and lore. Learning the nearby Bear Valley Wildlife Refuge is a bald eagle nesting site, he wants to add an eagle feather to his medicine bag and explore the refuge as a site for his Vision Quest, a Native American rite of passage.

He and his three friends get far more than an overnight campout as they encounter a black bear, an old man living in the refuge, and a pair of eagle poachers. Bringing the poachers to justice, they test their courage and gain confidence in themselves and each other.

Kindle (currently marked down by Amazon to $.99) and Print ($8.75) editions available at Amazon.com.

The kids walked through the last clumps of ferns and came out to the edge of the clearing. As Hap predicted, the massive trunk of a Douglas fir filled most of the clearing. Already partially disintegrated into rotted wood, it had obviously been there for years. Still, it was impressive with a diameter of four or five feet blocking the view to the far side of the clearing.

“Look at where the knot fell out of it,” Fiona said pointing toward one end where a squirrel’s bushy tail stuck out of a knothole. “Nice little home he’s got there.”

They scanned the length of the fallen giant searching for more bolt-holes for squirrels or whatever other small animals might have taken up residence. Fiona and Billy started across the clearing to take a closer look.

“Oh my God!” Fiona screamed as a huge, black head rose from the other side of the fallen tree.

“Shush, shush. Quiet or you’ll get his attention,” Black Crow whispered. “Let’s just back out of the clearing.” Billy and Fiona took his advice and backed away from the fallen log, carefully watching the bear’s head.

The large black bear heard them talking and began pulling itself up to the top of the tree trunk.

“Run!” Billy gasped and grabbed Fiona’s arm to pull her out of the clearing, but Black Crow didn’t move.

Hap, Fiona, and Billy backed out of the clearing, leaving Black Crow facing the bear alone. The three kids stopped several feet outside the clearing, looking back.

“Come on, Mitch,” Billy urged. “Get away while he’s still on the tree.”

However, Black Crow didn’t seem to hear him, or just didn’t pay attention. He just stood watching as the bear humped himself to the top of the tree trunk, then slid down the side closest to where the boy stood transfixed.

“We can’t leave him,” Billy whispered.

“Just what do you expect us to do?” Hap answered in the same low tone.

The bear stood on all fours with his head raised as he sniffed the air. He moved his head side to side, seeking the source of the odor his keen nose detected–the smell of a human being.

Black Crow stood stock still, barely breathing. He watched as the bear took a step toward him. The bear continued waving his head back and forth, sniffing as he did. Black Crow thought the bear might not see him in the dappled light and shade of the clearing. Then the bear looked him straight in the eye.

Neither boy nor bear moved for long seconds. The bear took another step forward, and then another. Black Crow moved only his eyes left and right, but saw nothing in the clearing except himself and the bear. The bear was watching him.

The bear continued its slow approach until he was with a few feet of Black Crow. It reared up on his hind legs. Towering over the boy, the bear sniffed again. Black Crow saw the bear’s eyes raise from his own to look at something behind him. The boy thought the bear must have noticed the sounds the others made as they ran away through the trees.

The bear looked down again into Black Crow’s eyes. Black Crow thought he should avert his eyes, not look at the bear directly. He read somewhere a bear would consider looking into its eyes a threat. Yet he couldn’t wrench himself away from gazing into the deep, black eyes. Intelligent eyes, he thought. He felt the bear was considering him, measuring his strength and will. Black Crow knew, somehow, if he looked away, the bear would think less of him.

Finally, the black bear dropped again to all fours, turned around and walked away at a leisurely pace. At the edge of the clearing, he turned again and looked in Black Crow’s eyes. Then, impossibly, the huge creature disappeared like a puff of smoke dispersed by a breeze.

Black Crow knew with absolute certainty, as if a voice had spoken to him within his mind, the bear was his spirit brother.

He heard noises behind him and turned to see the three others slowly coming back into the clearing. He smiled. They hadn’t run. These were his true friends.