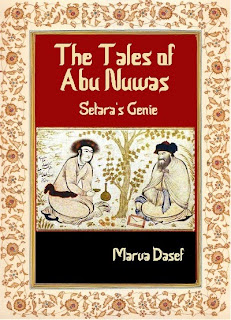 Today, I’m interviewing Faizah, the star of the novel, to find out a little more about her life and times.

(Marva) Laww Smahti? Actually, Faizah, I don’t speak Arabic, so if you could indulge me by using English, I’d appreciate it.

(Marva) You attend a small school run by Master Wafai. How did you start school when you’re from a poor family of low status?

(Faizah) Luck, I guess. When I was only five, my mother was giving birth. The delivery was difficult, and my mother was in great pain. My father sent my brother, Ali, to Master Wafai. He came, of course, and helped ease my mother’s birth pangs. Without him, she might have died. Unfortunately, my sister did not survive.

(Marva) I’m sorry to hear that. But you credit Master Wafai for saving your mother’s life. Is that what got you interested in the medicine he practices?

(Faizah) Indeed. I watched closely as he blended the pain killing mixture. Beid el djinn is the root of the mandrake plant. It stifles pain and helps a person to sleep. Too much, however, would kill. It’s the knowledge of which plants to use and how much I wanted to learn. Master Wafai watched me watching him. He asked my father’s permission for me to attend school to learn the healing arts. My father saw the wisdom of his daughter having this knowledge.

Laughs Of course, he doesn’t know that Master Wafai also taught me to read and write, mathematics, and some simple spells. Master Wafai says that a little knowledge is a dangerous thing, which is why one pursues as much knowledge as possible. It leaves off being dangerous and, instead, becomes useful.

(Marva) Master Wafai is wise. How about Bahaar and Harib, your friends? How did they happen to go to Master Wafai’s school?

(Faizah) Bahaar was sent by his brother, Sayid. Since they have no parents, Sayid must leave the village for days at a time as he works for the caravan drivers. Being a good brother, he sought to keep his hot-headed little brother out of trouble by making him go to school. Harib’s father is wealthy, but he comes to school mostly because Bahaar and I are his friends.

(Marva) Was there a turning point in your search for Wafai?

(Faizah) Absolutely. Anahita, the goddess of wisdom, appeared to me and told me I had to lead the boys against an evil enemy. 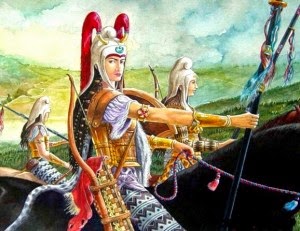 (Marva) Wow. How does a farmer's daughter turn into a warrior leader?

(Faizah) I'm certain Anahita gave me strength and courage, but I was also prepared by my life. As a farmer's daughter, I was no stranger to hard work in the fields and at home. As a student of Wafai, I learned about the world beyond my own village. So, strength from work and wisdom from learning were already with me. Anahita gave me the confidence.

(Marva) Now that the adventures recounted in your book are through, what do you plan to do with yourself?

(Faizah) Master Wafai is staying with the Simurghs for awhile, so he encouraged me to continue my studies of the healing arts at the Temple of Anahita in Gamaal. After that, who knows?

(Marva) I wish you the best. Finally, can you tell us about the day Master Wafai went missing.

(Faizah) Perhaps reading about it in the words you have put down in the book with my name upon the cover is the best way to do that.

(Marva) Absolutely. Thanks for talking to me today.

One by one, they stepped through the archway into the courtyard. The air hung heavy with the heat, and only the hum of insects broke the silence. The door into Wafai’s house hung open.

Faizah thought this strange. “He’d not leave the door open. It lets in the heat.”

Bahaar glanced around the courtyard. “You wait here. I’ll look.” He entered the house while the other three gathered under the palm tree for whatever relief its shade could provide. Faizah soon grew impatient; Bahaar was taking a long time inside. She was just about to go in after him when he appeared in the doorway.

“He’s not here, and everything’s a mess!”

“Should we wait outside for him?” Parvaiz asked. “What is the proper thing to do?”

“No, we can wait inside. He should be back soon,” Faizah replied. Bahaar stepped aside as she walked through the open door. Harib and Parvaiz followed close behind her.

“Goodness. It’s hotter in here than outside,” Faizah said, fanning her face. “Close the door, Harib. Maybe it will cool off some.”

Harib reached for the door string and gave it a tug. The top hinge broke free, and the door slumped across the opening.

Parvaiz examined the hinges. “You didn’t. Someone already pulled the hinge right out of the wall.”

“Something’s definitely wrong here,” Harib voiced what they were all thinking. Master Wafai usually kept his home neat as a pin, but not today. Besides the broken door, someone had scattered Wafai’s possessions on the floor. The chair was askew from the table and the curtain partially pulled back from the alcove where he had his bed.

Harib continued, “Maybe he had to leave in a hurry. Maybe somebody got hurt or something.”

Faizah considered this and then answered slowly, “Maybe.” She pointed toward the shelf. “But he didn’t take his medicine bag. Let’s check with the neighbors. It’s possible someone saw him leave.”

They filed out through the courtyard and turned left into the lane. The inn three doors down showed the only signs of activity, so they headed there. The public room was dark and cool after the stifling heat outside. The four friends clustered just inside the door while their eyes adjusted to the dim light. Bahaar carefully latched the door behind them to keep out the heat.

“What do you kids want?” Faluj, the innkeeper asked when they entered.

Harib stepped forward to do the talking. His father’s status in the village guaranteed Faluj would pay more attention to him than any of the others.

After salaaming to show his respect, Harib told the innkeeper, “We’re looking for Master Wafai. We were supposed to have lessons from him this afternoon, but he’s not at home, and his door is broken. We’re worried. Do you know anything?” he asked.

Faluj rubbed his stubbled chin for a moment in thought. “There may be no connection, but some mountain nomads came in here last night. I overheard one of them say their chieftain’s son was sick.” He shrugged, “Maybe they wanted Wafai to treat him.”

“Possibly,” Bahaar agreed, “but it doesn’t look like he left voluntarily.”

“That’s right.” Faizah didn’t try to hide the concern in her voice. “His medicine bag was still on the shelf. He wouldn’t go to treat someone without his potions.”

The four exchanged worried glances. There might be some innocent explanation for all of this, but it didn’t look good. What could have happened to their teacher?

Available at:
Amazon in both ebook and print.
In all ebook formats at Smashwords.