In Honor of Eagles 1

I like eagles. I've spent a little time up close and personal at the Wild Raptor Center located in Eugene, OR. It's for rehabilitating and releasing all sorts of raptors including eagles, hawks, owls, and other predatory birds. If you're in the area, you should go visit.

Eagles appear in at least three of my books. Most likely, they got at least a passing reference in a couple others. Today, I'll feature the book with "eagle" right in the title. 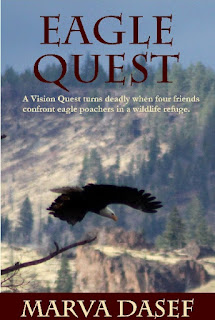 Set in the Klamath Wildlife preserves in Southern Oregon, this book is about the Bald Eagle flyout area in Bear Valley. Yes, we have Bald Eagles like they were pigeons in the park around Oregon. And we're danged proud of our big birds. The cover shot was taken by Coralie, a professional wildlife photographer and my long-time friend. See her work on her website at http://www.mrsroadrunnerphotography.com/

Email ThisBlogThis!Share to TwitterShare to FacebookShare to Pinterest
Labels: Eagles