Everyone has lost someone in war. Go back far enough, maybe it was the Civil War, Revolutionary War, War of 1812, maybe even the Hundred Years War. It's good to take a moment to honor them.

There are also those who go without remembrance even though they gave their lives, not voluntarily, but because others just had to shoot, bomb, and kill. We don't know many of their names, but I'm pretty sure my grandfather did.

My Memorial Day remembrance is for the horses and mules who were absolutely essential to and died because of war. WWI. My grandfather was a veterinary in the Expeditionary Forces in France. This is what he recalled (loosely interpreted by me).

World War I took many young men away from their homes and sent them off to foreign shores. Eddie’s Pa was one of those young men. He has his own tale to tell.

In 1916, I was still a young buck and not yet married, so I signed up with Black Jack Pershing to go after Pancho Villa. Ol’ Pancho and his banditos had come into US territory and killed a bunch of folks in Columbus, New Mexico. 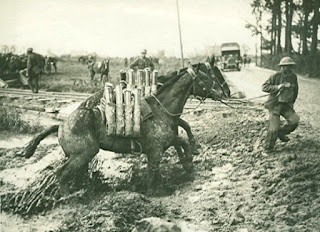 The worst part for me was the horses being swept up in the middle of the battle. It broke my heart to go out on the fields after the fighting passed by and after the dead and wounded men were collected. Sometimes the ground was so soaked with blood that my boots were covered before I got back. A horse with an artery torn open bleeds gallons of blood; men only a few pints. It angered me when I thought how much the horses gave. They didn’t even have a say in goin’ to war. Men, at least, had a choice.

I carried a sidearm and had to shoot more horses than I can count. Those we could save, we’d bring back to the line and see if we could treat their wounds. It was a second heartbreak when they wouldn’t heal proper and we’d take them out behind the tents to put them down. We dug a deep trench to bury them for health reasons and we kept digging every day to hold them all. 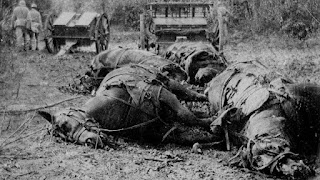 While we treated the horses, close by we could see the wounded men being brought back from the battlefield. Legs and arms were already gone or had to be cut off by the doctors right there in the field. From the history I’d read about the Civil War, this was just about as bad. If the choice was amputate or die, then they had to do what was necessary. We dug another trench to hold the arms and legs the doctors cut off; the dead soldiers we wrapped in oilcloth to be sent back behind the lines, where we hoped to send their bodies back home to their families.

All told I spent twenty months in France. It was the worst part of my life and I hoped and prayed we’d never see another war like this again.