In Honor of Eagles 3

These posts are supposed to be about eagles, so how does a giant fit into the story. In "Bad Spelling (Book 1 of the Witches of Galdorheim)," the main character and her brother are on their way to the hall of the Mountain King and run into a cranky jotun (rock giant). A few eagles show up to assist the kids. Bad Spelling is on Amazon in Ebook and Print formats. Or, go get a free copy at Smashwords.

First, however, here's some information on jotuns. 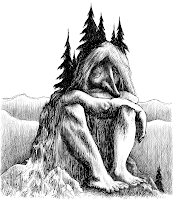 Giants aren’t the most popular neighbors. They tend to be a little selfish, keeping golden-egg laying geese and magic harps to themselves. In Norse mythology, a giant called a jotun (or Jötunn) is literally made of ice or stone (depending on the season, I guess). Frost giants are far more popular in games and fantasy books. They got a big screen treatment in the movie, "Thor," and the uncoming sequel. We discover that Thor's brother, Loki, is half-jotun. There’s just something chilling about a giant made of ice. Since the scene which has the jotun is spring, I went with the stone giants. They could also use the press.

Jotunheim is one of the nine worlds, the homeland of the frost and rock giants. Situated in Midgard, on the middle level of the Norse universe, Jotunheim is separated from Asgard by the river Iving, which never freezes over. It lies in the snowy regions on the outermost shores of the ocean. Mimir's well of wisdom is in Jotunheim, beneath the Midgard root of the ash tree Yggdrasil.

I’m not much more enlightened, but who doesn’t love a big, bad giant roaring in to cause havoc? When Kat and Rune meet up with the jotun, she finds that her ability to communicate with animals grows stronger the further away she travels from Galdorheim Island.

The path was clearly magical. The foliage, although wild and unkempt, glowed with greenery and flowers. Giant mushrooms, some the size of dinner plates, sprouted under the bushes. Birds twittered in the trees. Kat ducked as a bumblebee as big as her fist droned past her head on its way to another blossom. Here it was spring, just like on Galdorheim under the shield.

Kat pulled off her parka and draped it over her knapsack. Rune soon did the same, even though his tolerance for extreme temperatures was usually much higher than Kat’s. They were strolling along, enjoying the warmth, the flowers, and the buzz of the bees, when Kat looked up to see an eagle riding an updraft in a lazy circle above them. “Look!” Kat pointed. Rune glanced up at the bird.

Kat looked down at her feet and mumbled, “I thought it was interesting.”

“Shhh! Do you hear something?”

Kat listened but heard only chirps and buzzing. “No, but your hearing is better than mine.”

Rune turned slowly in place, trying to home in on the sound. Kat watched, puzzled.

The hillside by the path trembled then heaved upward. Dirt and rocks flew through the air. The shaking earth knocked Kat backward. She plopped onto her behind with a yelp, ducked her head, and covered it with her arms to fend off flying gravel. Peeking out from beneath her upraised arms, Kat's eyes widened, and her mouth dropped open. In front of her, the shaking earth rose and unfolded. Then a monstrous glob of rocks and dirt rose higher and higher into the air. Two huge boulders blinked at her. Kat screamed. A gaping mouth appeared beneath the eyes, and a monstrous nose jerked and wriggled its way to a place between the eyes and mouth.

Rune grabbed her arm, jerking her to her feet. “It’s a giant! Run! Run!”

Kat sprinted after Rune, who quickly outpaced her, as the giant continued to grow and take shape from the rocks and earth. Kat risked a quick glance over her shoulder. A horrendous, rocky fist swung in a downward arc, its target appallingly clear. She tried to force her flying feet to move even faster, hoping to outrace that ponderous, clenched hand. She looked up to see the eagle plummeting downward, its wings folded against its sides. Kat aimed a thought at the eagle. “Help me!” The eagle flared its wings and stopped abruptly in midair. It then turned and flew away. She was disappointed but not surprised when the eagle left. No use. She picked up her feet and raced after Rune.

A wild, high-pitched screech split the air. Kat looked back again. She gasped in surprise, stumbled, and almost fell. Flailing her arms and digging in her heels, she managed to stop upright. She stared with unbelieving eyes as a flock of eagles, dozens of them, circled the monstrous form. The birds dived at the thing’s head, distracting it from its intended victims—her and Rune.

The giant swung its huge hand, batting at the eagles, trying to drive them away. The big raptors easily evaded the lumbering blows. Kat watched as the eagles dove again and again, buffeting the creature’s head with their wings, pecking at its eyes and threatening with their outstretched talons. She wondered how they could possibly hurt stone eyes, but the giant seemed to think they could. It shriveled downward, shedding rocks and dirt as it collapsed. Down and down it went, melding back into the earthen hillside that spawned it.

The eagles flew in a wide gyre around the hillside, preventing the giant from reforming. One of the birds veered away from the flock and flew down to Kat. It landed gracefully on a boulder beside the path. Folding wings and settling feathers, it cocked its head and regarded her with a fierce, yellow gaze.

“Thank you,” Kat gasped, fighting to catch her breath. “Thank you so much!” The great bird dipped its head in what could only be an acknowledgment. Then it spread its wings, uttered a soft “Kkkreeeee,” and launched itself into the air, climbing away with long, powerful beats of its wings.

Rune shut his open mouth and then gasped, “You did it again! Do you believe me now?”

Email ThisBlogThis!Share to TwitterShare to FacebookShare to Pinterest
Labels: Eagles