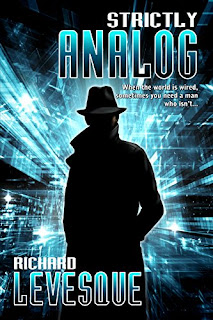 Strictly Analog by Richard Levesque
My rating: 4 of 5 stars
Buy at Amazon

The blurb pretty much covers the boring part I'd write here, so I'll skip it.

First good thing: Being reasonably familiar with computers and the trends of personal (really personal) computing, I totally believe Levesque's prediction of the future.

Second good thing: Ted Lomax is likable behind the hard-bitten detective facade. He'd do anything to save his daughter, despite her not having much of a personality.

Third good thing: The love interest, Philly, is not a "throw in a chick for the romance crowd" character. She's unique (boy is she unique), smart, and caring.

Bad things: Um, a couple of typos. Maybe Ted's daughter could be less of a putz. Miles (the villain) might have a little more depth for us to understand his motivations. Strictly for a too-light touch with secondary characters, I'm knocking off one star.