Get The Tales of Abu Nuwas ebooks for only 99 cents each.
Sale lasts through the end of July.
SETARA'S GENIE  Kindle Ebook
FAIZAH'S DESTINY Kindle Ebook 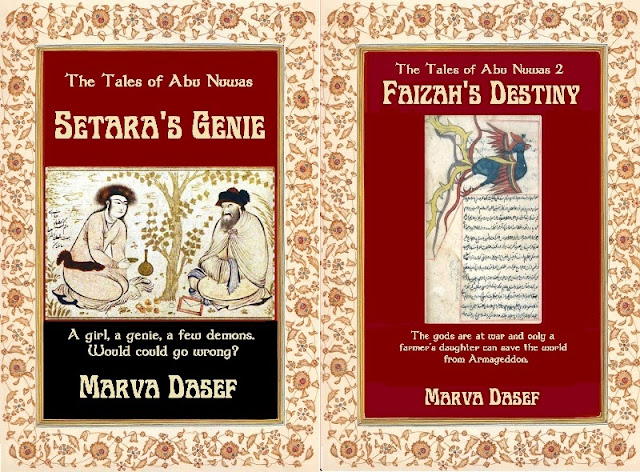 
Master Wafai wants more than anything to meet the elusive, all-knowing Simurgh. He feels it’s very important for his students to learn about magic, even though there is very little to be found around their tiny village. Of the Simurgh, he says:

“The Simurgh is a tutelary creature.” Wafai looked meaningfully at Bahaar’s tablet.

The boy quickly applied chalk to good use. Wafai continued. “It is so old, according to legend, it has seen the world destroyed three times over.” Wafai folded his long fingers around the chalk, holding his hands against his chest. “Many believe it has learned so much that it possesses the knowledge of all the ages?a great teacher and a guardian. The Simurgh simply are. In the past for all of eternity and in the future for all of eternity.”

THE TALES OF ABU NUWAS: FAIZAH'S DESTINY
The gods are at war and only a farmer’s daughter can save the world from Armageddon.

Email ThisBlogThis!Share to TwitterShare to FacebookShare to Pinterest
Labels: The Tales of Abu Nuwas