Villain or Hero: Is History Wrong? 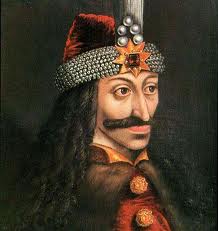 Most of you have heard of Vlad the Impaler, right? Count Dracul, the model for Dracula? Well, Kazikli Bey is the middle-eastern translation for something like “The Impaler Prince.” His popular last name, Dracul (there are many spellings) came from him signing up to a Hungarian chivalric group, the Order of the Dragon. Vlad’s father was also a Dragon member and the Dracula name is a title.  Vlad’s family name was Basarab. I’ve seen a couple of horror works where the authors did enough research to hone in on the family name, revealing only later that the evil monster is none other than Dracula.

The real Vlad was a nasty character. He directed his wrath against the Ottoman Empire for the most part. His habit of impaling his enemies on stakes (not only heads, but sometimes entire bodies) earned him the title of The Impaler Prince. When Vlad was still a child, his father was ousted from his own throne of Wallachia. Vlad the elder made a deal with the Ottomans to get back at his fellow countrymen. To secure ties to the Ottomans, he sent his two sons as hostages. The elder son, Vlad Junior (Mr. Impaler), was defiant toward the Sultan and was beaten quite often. On the other hand, the younger son, Radu, ingratiated himself to Sultan Mehmed II and even converted to Islam. He was given the title Bey and served Mehmed II leading the Janissaries (think Special Forces). Vlad Jr. came to hate the Ottomans for his treatment and waged a long and bloody battle with them. His nasty habit of impaling enemies earned him the title, Impaler Prince.

In “Setara’s Genie,” I thought that giving ol’ Vlad a different face would be a nice twist. What if Vlad didn’t really impale anybody? What if he was trying to gain peace between the rampaging warlords that messed up Romania? It’s all in the PR. If he puts himself out as the baddest mother in the valley, wouldn’t you think it a bad idea to cross him? Considering that the real life Vlad spent his youth with the Ottomans, learned Turkish, and studied the Quran, he might have actually had some respect for his former captors. What if he did perpetuate a reputation of badassery just to keep the peace?

In my book, Setara tries to go off on a cruise ship and ends up in a slave market. Lucky for her, an ancient crone pretty much forces her to buy a pendant. It’s Kismet (another middle-eastern concept)!   Basit is captured in a bottle of wine, and Setara can’t get him out of the bottle of djinn. She’s hauled off to the slave market, while her genie gets pickled.

The Kazikli Bey happens to be in the market for slaves and, noticing that Setara is wearing the locket stolen from his mother, he purchases her. He turns out to be a really nice guy, releasing Setara from bondage and ensuring her safe journey homeward with Basit, who is out of the bottle, but afflicted with one monster of a hangover.

“I have this girl up for sale. If she catches the eye of the Kazikli Bey, then she should fetch a good price. Keep her well-shackled. She tried to run away.”

The captain grabbed the front of Setara’s tunic and yanked the top lacings loose. She twisted away. “Stop it!” Her face reddened when the pirate exposed more of her chest than was proper for an unmarried girl her age.

The trader took the chain on her shackles and pulled her behind the platform. Many men, women, and children sat or stood with chains attached to wooden columns by iron rings. A boy of only six or seven hugged a woman’s side, crying loudly. She soothed him, but it didn’t help. One of the trader’s helpers jerked the boy away from the woman. She tried to hold him, but the man dragged the child away from her.

Setara looked around, trying to think of something she could do, but calling out for help was useless. Soon, they led her up to the stage. The auctioneer looked her over and grabbed her jaw to pull her mouth open. She struggled to turn away.

“Good teeth. Not a bad body. How old are you, girl? Fifteen, sixteen?”

Setara jerked her head away from his filthy hands. “None of your business, you piece of camel dung.”

“Never mind. It doesn’t matter.” He shoved her to the center of the stage and began the auction.

“Who will give me one hundred shekels? She’s a strong, healthy girl. Good for household or fields.” He winked at the crowd and added, “Maybe your harem is in need of some fresh blood.”

Setara’s face burned with humiliation. She looked out at the crowd of men, for the crowd was entirely male. No self-respecting woman would come to a slave auction. The audience laughed and nudged each other’s ribs. Setara felt sick. She wondered if it would put them off if she threw up on the auctioneer’s sandals.

The Kazikli Bey looked at her intently. He rose from his throne and walked up to the stage. “Bend down, girl.”

“I will not. Keep your slimy hands away from me!”

The auctioneer pushed her roughly to the front of the stage and forced her to lean over toward the man. He reached up, and Setara closed her eyes, afraid of what would happen next. She felt a slight tug on the thong that held the amulet.

“Where did you get this?”

Setara opened her eyes and looked into the soft brown eyes of the Bey. She saw no menace there. Instead, she felt a strange attraction to him. In a flash, she realized this was the face she had seen in her vision.

“In Gamaal. I bought it from an old woman, a witch.”

“Ah, of course. Her name was Seralgo?”

“That was the name on the shop.”

The Kazikli Bey turned to the auctioneer. “She’s mine. Take her off the block.”

TALES OF ABU NUWAS: SETARA’S GENIE
A girl, a genie, a few demons. Would could go wrong?