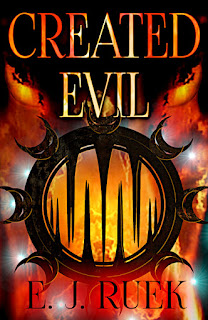 Sacred texts predict it. Storms all around the world portend it. Out of Egypt comes a warrior-priest from an ancient, secret order as Tess Warlow, arcane scholar, searches desperately for answers to the riddle that will bring safe passage to all she cherishes and loves.

It is the Mabon Moon, and, at the height of a Satanic cult's high mass, there comes a conjuring. The Gateway Guardians rise to hunt.

NOTE TO READERS: Parts of this book are purposefully written in the archaic syntax customary to traditional arcane language, such as dropped articles. There are also several fabricated names and words.

With one last effort, he swung himself up onto the level table rock that marked the end of the ascent—the Serpent’s Head—rolling onto his stomach to crawl.  The wind hit him, then, more violent than ever, so he stayed prone, the blood trail of his hands marking his progress.  That trace turned blackish purple on the strange rock surface, rock that was changed from that of glass to something dusty-feeling, though it shed none of itself upon his body or his bleeding hands.

His eyes searched, then found the last symbol.  Yet again he spat.  Yet again he rubbed the counter symbol, uttering the phrases specific to it.  Then he turned about and crawled forward, meter by meter, using hands and toes, his belly glued to the rock surface.  Ahead, he saw the opening—a cleft in the rock.  He kept his eyes on it, his hearing deafened now by the roar of the wind that again stole his breath away.

Reaching that cleft, he got to hands and knees and grasped the smooth rock, though there was almost no purchase for his fingers.  Then he tried to stand.

The wind, steady till now, suddenly increased, blasting against his back, pushing him forward.  His face and torso hit the edge of the cleft.  He felt bone give in his jaw, blood gushing forth to flood his mouth and down his chin.  A second blast of wind, pitched him sideways.  He overbalanced.

Desperately, his hands clawed for some hold.  And found none.  The slow, agonizing seconds of his toppling fall brought keen awareness to him of his death.  He tasted it in the pit of his stomach, churning up in bitter, rancid surety as he felt his body bounce once upon the table rock, then slip over, his hands still reaching, grasping.

Then a jolt, and the world around him stopped.  Someone grasped his forearm, digging in, breaking flesh.  He grasped back, desperate for survival, his hands locking grip around a grainy, mesh-like hide, pliant but powdery in feel.

Struggling to help himself and his rescuer, he fought for any foothold, but there wasn’t one.  He raised his eyes and saw gnarled fingers—each one covered by a hornlike claw of blackened yellow, deep ridges of advanced age running from root to pointed, thickened tip.

The creature pulled him up, its grip vice-like, the muscles on its forearm bulging, thick tendons ridging up and bowing.  Two golden eyes stared down at him from a white-maned face both beautiful and ancient.  With one smooth, powerful pull, Sebastian found himself lifted, only to have another clawed hand descend upon his forehead, bringing instant darkness.