Happy Krampus to You!

Of course, we all love Santa Claus (or Santa Claws from "Nightmare Before Christmas"), but leave us not forget the adorable Krampus. After all, without Krampus, bad children wouldn't just get coal in their stocking, but they'd also be kidnapped, thrown into a sack, and eaten by the lovely Krampus. The Grinch ain't got nothin' on Krampus.

Here's some stuff from Wikipedia: 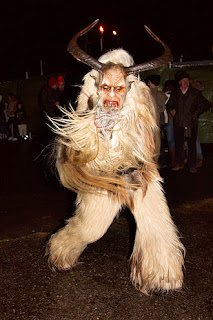 In folklore, Krampus is a horned, anthropomorphic figure described as "half-goat, half-demon", who, during the Christmas season, punishes children who have misbehaved, in contrast with Saint Nicholas, who rewards the well-behaved with gifts.

Krampus is one of the companions of Saint Nicholas in several countries including Austria, Bavaria, Croatia, Czech Republic, Hungary, Slovenia, South Tyrol and parts of Northern Italy. The origin of the figure is unclear; some folklorists and anthropologists have postulated its pre-Christian origin.

In traditional parades and in such events as the Krampuslauf (English: Krampus run), young men dressed as Krampus participate; such events occur annually in most
As evil as jolly Saint Krampus is, his role of getting naughty children to behave has worked wonders in the Slavic areas of Europe.

Now, if you don't have a child to traumatize for life with the story of Krampus, maybe you'd rather give a very nice present to an older person in your family (Grandma or Grandpa). TALES OF A TEXAS BOY is just the right present for that hard-to-shop-for relative.
Buy it at Amazon for only $8.99 and make everybody happy. Now isn't that a better gift than cologne or a tie? Oh, you can also get the book for your Kindle, other ereader, or for your listening pleasure in audio format. Gotcha covered for Christmas.