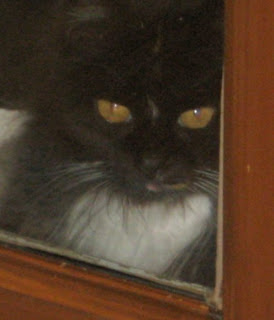 Many many, many, many writers are in love with the Celtic myths. I’ve delved into them, too. However, I’m not a big fan of the flitty little cute faeries (or fae or fairies). In Celt mythology, there’s a fairy (or fae or faerie) for just about any purpose. The “serious” fantasies love the idea of the fairy troupe. More than a few equate fairies to Arthur legends, more specifically Merlin.

The third book in the Witches of Galdorheim series, Scotch Broom, is set in the Scottish Highlands. Of course, I had to include at least one fairy in the mix or I’d be violating some unwritten fantasy rule.

Anyway, I found a particular sidhe I liked. She’s a big black cat with a white chest. Aha! I happen to have the model for said cat (in a much reduced size) sitting at my door every morning demanding a handout. We call her Bitch Kitty. Yes, she has attitude in spades. So, there’s my model for Cait Sidhe, a companion to my erstwhile heroine, Katya.

Katya has already found two companions: Sianach a stag and Cusith (another sidhe) a giant, green hound. They’re tromping through the swamps trying to find the Trow King’s hall in the middle of the Otherworld (the alternate magic world in the Scottish Highlands).

“What’s up with him?” Katya asked.

Sianach lifted his chin for a better view. “He appears to be in pursuit of an animal of
some type.”

Katya and Sianach walked faster after Cusith, the dog’s trail marked by flying grass and water. When Cusith finally stopped, Katya and Sianach trotted to catch up. The hound was standing over something furry and black that lay on the ground beneath his huge paw.

Don’t hurt it,” Katya called out. Cusith turned his head toward her, tongue lolling.

Katya reached Cusith’s side and knelt down to examine the raggedy clump of ebony fur. It leapt up, scrabbling for a foothold, but Cusith clamped his paw down harder to hold it still.

“It’s a cat!” Katya said. She reached out with her mind, but met the same blank wall she had with Sianach and Cusith. So, she tried the old-fashioned way. “Here kitty, kitty. Nice kitty.” An ear-splitting yowl almost knocked Katya back on her rear.