How Maui Created the Hawaiian Islands 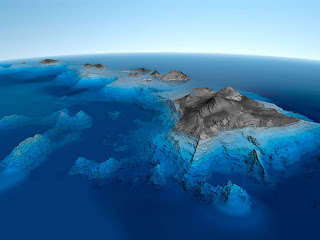 Guest poster Rick Kirkam (Sensei J. Richard Kirkam) provided this Hawaiian legend for the Myths and Legends series. Thanks, Rick!
Maui was a demigod in Hawaiian folklore. His father was a god and his mother human. Maui had three brothers though not much is mentioned about them as individuals. Though Maui was a trickster he was also always trying to help humankind.....
Maui went to his father and came back with a fishing hook. He told his brothers to take the canoe and paddle out to sea. They went out so far they became nervous and wanted to turn back. Maui told them to continue to paddle. When it seemed they would never stop Maui finally had them halt.
He took a fishing pole and line, attaching the magic hook to it he's gotten from his father. It was the longest fishing line Maui's brothers had ever seen. Maui threw the hook into the sea and told his brothers to begin paddle and not to turn around.
Paddling was hard on the brothers and they could hear Maui grunting as though he'd caught a huge fish. Finally one of the brothers couldn't fight his curiosity any longer. He turned to see what his brother had caught on the fishing pole. The line went slack and broke.
Maui scolded his brothers. Telling them he wanted to raise a continent and all he pulled up were these islands.
About the Author
Sensei J. Richard Kirkham is an in home tutor for poor grads, behavioral problems, self-defense and computers in Honolulu Hawaii. Recently he updated a backup program he wrote based on the needs of his very basic computer students to preserve their precious digital photos and important work files. Please support his efforts by visiting his web page http://inhometutoringhi.com/DontLoseIt/ and even subscribing to his free study and computer tips
You may post this article in its entirety including the About The Author Section