Besides the big ol’ gods, legends, and spirits–the ones that get all the press–myths are populated with a myriad of often tiny, more often unmentioned beings. Their job as minor characters in the mythos is not always mentioned, but they exist (well, in the mythical sort of existence) nonetheless.

While writing the Witches of Galdorheim series (heads up to any agents or publishers; it’s available), I delved into western European mythos finding the supporting cast for my books. Like bit players everywhere, they often ended up on the cutting room floor.

For example, in the opening scene of Bad Spelling, I mention tussers and tomtes. Raise your hand if you can tell me what they are. No peeking at the book OR the internet! Right, you’ve never read the book (except for a couple of you), so you’d not have a clue. Please note in the comments if you already know. Anyone? Go look it up in the Encyclopedia Mythica. 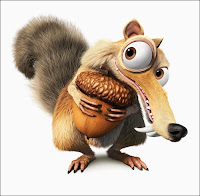 In the third Witches of Galdorheim book, Scotch Broom, I elevate one such small-time player to the exulted role of minion. If you watched the Ice Age animated films, you might be familiar with the proto-squirrel (with fangs) named Scrat.

The screenwriter either made the name up or also hit the Encyclopedia Mythica like I did. If the latter, then he simply used the name because a skrat is not a proto-squirrel at all.

One of the many creatures that are said to move into the farmhouses from time to time is the skrat. He usually lives in a beech tree or a cave and looks like a chicken that has been caught in a downpour. His wingtips and tail drag on the ground. He may also transform himself into a small bird, a goose, a dog or cat, or even a hair-covered man. Any family he lives with becomes rich.

Here’s a brief scene on how the skrat plays its minion role.


A scratching at the door caught her attention. Walking over, she peered through the peephole, but didn’t see anyone there. "Oh, bother. Is some spoiled brat trying to play tricks on the old woman?" She grabbed the handle and jerked the door open, screaming, "I’ve got you!"

Nobody stood on her porch. A clucking made her look down. A scraggly, wingless chicken, looking as if it’d been out in the rain, crouched at her feet. The skrat stood on four wobbly legs, staggered around Cailleach’s legs and into the house. It squatted by the fire and ruffled its feathers.

Cailleach glared at the scruffy creature. She never could tell one from the other, but they had their uses. "What do you want, Skrat? I’m busy--"

Skrat spoke in a high-pitched, ragged tone as if he was gargling pebbles. "I have news."

Cailleach stepped closer. The skrats didn’t bother her unless they had something good to report. "Tell me."

The hag considered for a moment. "Is it one of the Wiccans? They’re harmless. Always collecting plants for some potion or another."

"Wiccan, yes, but witch, not wannabe."

Cailleach narrowed her eyes and plucked at the hair growing from her chin. "Where,
exactly?"

"Why would a real witch be there? Staking out territory?" The crone pondered a moment, then looked down at the skrat, which had not dried out at all. "You watch. Bring your brothers with you. Report thrice daily to tell me what she’s up to."

The skrat nodded its featherless head. "What you pay?"

Cailleach aimed a kick at the skrat, but it scuttled out of the way. "Bother! You’re always asking about pay. Have I ever shortchanged you?"

"No. Want to tell brothers."

Cailleach glared at the creature. "A month’s grain for each of you."

The skrat wobbled to the open door and departed. Cailleach closed it behind the creature, then returned to her fireplace. She swished the brew in the cauldron a few times.

Note: Cailleach is the Scottish Celtic goddess of winter fallen on hard times in the present day world. She’s tired, aging, a mere vestige of her former glory, but a scheming old bitch like her won’t ignore opportunities when they fall from the sky. Which is exactly what Katya does.
#