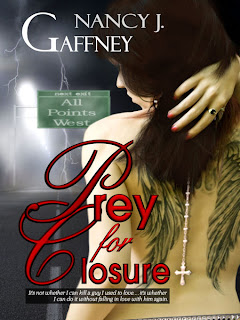 I'd like to welcome Nancy Gaffney, author of the new release "Prey for Closure" from Eternal Press.

Thank you for joining us today. Before we begin, why don't you tell everyone a bit about your book?

Nancy: 'Prey for Closure' is a paranormal urban fantasy. Ellie (the lead character) receives a call from one of the few people she actually owes a favor. A friend of hers from college is caught up with Sam in a bad way. He takes the phrases, 'I want to be with you forever' and, 'I'm never going to leave you', a l-i-t-t-l-e too seriously. She travels to Burlington, Vermont, and 'deals' with Sam. Things are further complicated by the fact that Sam is Ellie's first love and that, while in college together, they had a very unhealthy co-dependent relationship.

Where did the concept for the book come about?

Nancy: There were two motivations behind 'Prey'. One was the fact that I found this latest trend of stories featuring self-loathing women who hem, haw, and ultimately don't do what they're supposed to do a little to prevalent for my liking. Women are awesome. We're flawed. We make bad decisions. We make awesome decisions. We are lovers, fighters, warriors and, yes, insecure. I wanted a story where a woman does what woman has do and she does it.

The second motivation was this: who hasn't wanted to exorcise a former boyfriend (especially one that ended badly) by making him into a narcarssistic vampire with huge abandonment issues and a nasty vindictive streak? (chortles).

How long did it take you to finish, from concept to final product?

Nancy: 'Prey' came to me pretty quickly. I'd say the first four chapters happened in less than two weeks. What was odd was that the last chapter, the climax, where Ellie and Sam confront each other, that was the hardest chapter to write. You'd think it'd be the easiest, right? You've got everything set up (plot wise), all your characters are right where you need them to be. But that final threshold, that dark, emotional place, the place you have to go (as a writer and a reader) in order to make your story read the way it deserves to be read, that was tough for me. Maybe it was because I incorporated more of my own personal emotions into the story or that I parted with more personal emotions as I wrote that last chapter. I really can't say for sure.

Are there any authors that have influenced your own writing?

Nancy: Heck, yeah. I love Stephanie Laurens. Her Bastion series is so cool. And it's not because she writes sexy books. It's the way she creates a whole world and all you have to do is read the first paragraph of any of her books and you're instantly transported. Tolkien, CS Lewis, and (sigh) even JK Rowling are authors I admire. I include Rowling - not because she's of the caliber of Tolkien or CS Lewis, because (in my opinion) she isn't - because she accomplished (to a certain degree) what Lewis, Tolkien and Laurens achieved: a whole world where you, as a reader, can believe that what's on the page is that world's reality.

It's that level of believability and creativeness that I strive for.

Do you have any favorite place where you feel your Muse is more apt to come and play while you write? Or perhaps you listen to music? If so, what do you listen to?

Nancy: What a fun question! (grinning) I'm a creature of habit. I love to sit at my desk when I write. I have this slightly off-kilter chair. I have my lip balm within reach. There's almost always a cup or glass of some beverage to my right. And yes, I love to listen to music while I write. I'm a child of the Eighties; power ballads, pop, hair-bands - it's all good! Bon Jovi, Def Leppard, Bonnie Tyler, Cher (don't be mocking my Cher - she's fabulous!), Lita Ford, soundtracks from 80's movies... Similar music from the 90's through today I also listen to. I also love feisty-female songs. Artists like Pink, Kelly Clarkson, The Donnas, Joan Jett - they all appear on my playlist! I have to admit I don't like rap and I don't find a lot of inspiration when country music plays.

As a writer, what is your greatest fear?

Nancy: Letting my characters down, and by extension, letting my readers down. It's one thing to dream up a fabulous story. It's quite another to translate that idea to 'paper'. It's very easy to take short-cuts, not follow-through on an emotional moment or not deliver a plot-line the way it deserves to be delivered. I've read one too many stories where an author 'bailed' on their story. I'm petrified that I'll do that. I think that's the reason why there was nearly a two-month gap between the four and fifth (final) chapter of 'Prey'. I wrote a couple of endings, but none of them 'delivered' what deserved to be 'delivered'. It wasn't until I told myself that I couldn't hold back and that I had to write what deserved to be written that I actually finished the story.

Nancy: Fun Question! I have a beverage - tea mostly (English Breakfast, with milk and honey), face-cream (I'm generally not a vain person, but I'm always on the look out for wrinkles). There's Slick; he's always good at keeping me honest. He's a grey-wolf 'beanie-baby', by the way. I have a thesaurus, Barbozoi's Handbook for Writers (an old college text book I can't believe I haven't lost, mangled, or otherwise damaged), a note pad, and intermixed with my pens is a bottle of nail-polish, two different lip balms, an eyeliner and mirror with tweezers and at least three hair ties/elastics. All so that I have things on-hand when I procrastinate! lololol!

Do you have any new projects that you are working on? If so, what are they?

Nancy: I just sent in a contract, again with Eternal Press, for a fabulous, fun, science-fiction adventure story. It's called, Another Way. It's five-hundred pages of space-opera goodness. I'm so excited about that. And, I have a Regency-era series called Valkyrie Park that I'm working on. It's not finished yet, but I have it all mapped out (on paper and in my head). It's not a bodice-ripper. It's definitely an adventure series. It will, though, feature some strong romantic elements. I have to admit, I'm really, really stoked about Valkyrie Park. A very dear friend of mine (who's a very talented digital artist) even created my characters for me.

What tip would you offer to a new writer who is just beginning their submission journey?

Nancy: You know that catch phrase/cliche: just do it? I hate to say it, but it's a cliche/catch phrase for a reason. Write what's in your head/heart. Get it on paper. Send it out to publishers. Yes, you should research 'who' you're sending your story to, but it won't get out there unless you put it out there. Join or create a writing group. Participate in some online groups. Find out what you need in order to help you motivate yourself. *That's* when you'll find yourself celebrating your first - and hopefully - fiftieth by-line.

Please tell our readers where they can find you.

Nancy: Anyone who wishes can e-mail me directly.

I can be found on the Eternal Press website:

If you want to add anything please feel free to do so.

Nancy: Marva - thank you so much! You are a gracious hostess!