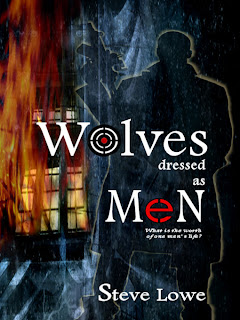 Thank you for joining us today. Before we begin, why don't you tell everyone a bit about your book?

Steve – WOLVES DRESSED AS MEN is a dark werewolf thriller about a man who is hunted through the slums of a crumbling, burning city. From the cover description: Thiess remembers very little of his life before he changed. His only memories now are of frozen mornings, naked and coated in human blood, and of running for his life from a Tracker bent on his destruction. Thiess prays for forgiveness and begs God to cure him of an affliction that turns him into a murderous beast, but as the Tracker closes in, he is losing any hope for salvation. Then he falls in love with Maria, and together, they race through the crumbling slums of a city slowing burning to the ground at the hands of a serial arsonist, setting off a chain of events that will threaten the existence of mankind.

Where did the concept for the book come about?

Steve – My wife brought home a werewolf romance novel given to her by a friend at work. I had not written any fiction in years, but I read the first chapter of this novel and decided I could do better. This was my attempt, and also my re-introduction to writing fiction after spending the previous seven years writing nothing but sports for my hometown newspaper, The South Bend Tribune.

How long did it take you to finish, from concept to final product?

Steve – This began as a short story, which was published online by The Absent Willow Review. Several readers liked it, but wanted more, wanted to know what happened to the characters. So from the initial writing of the short story to the first draft of this novella, it happened in a span of about five months.

Are there any authors that have influenced your own writing?

Steve – Chuck Palahniuk and Christopher Moore, though you wouldn’t be able to tell by reading this book. Cormac McCarthy has probably been my biggest influence.

Do you have any favorite place where you feel your Muse is more apt to come and play while you write? Or perhaps you listen to music? If so, what do you listen to?

Steve - My life is very hectic – I’m married with two sons and a foster child, all around the ages of 11-12, plus I work two jobs. Really, I write when and where I can steal the time to do so. Most often, Pandora plays in the background when I write, and the music I listen to tends to affect my work. I’m currently working on a project where the main character is an old Blues man, so I’ve been listening to quite a bit of Blues lately.

As a writer, what is your greatest fear?

Steve – It used to be that no one would like what I wrote and think less of me, but not anymore. Now, my greatest fear as a writer is snakes. Have you seen some of those damn things? Especially water snakes. I’m getting the willies just typing this.

Do you have any new projects that you are working on? If so, what are they?

Steve – The aforementioned story is about an old Blues man who “loses” his blues, or his desire to play music. Around the same time, the world falls apart thanks to a horrible epidemic, and “The Sawdust Man” wanders the Midwest battling the infected while searching for his new purpose in the post-apocalyptic world.

What tip would you offer to a new writer who is just beginning their submission journey?

Steve – PATIENCE! Don’t just fire your story out there as soon as you finish it. Write it, set it aside and wait. Come back to it later and re-read it. Then edit it and share it with someone you trust. Someone who can give you an honest critique and is not afraid of telling you what’s good, what needs fixing, and what kind of sucks. You really need to find someone like that, and you also need to have a thick skin. If you can’t take criticism, you won’t be able to make your work as good as it can possibly be.