Come chat with the authors of the new November releases from Eternal Press. November 7th in the Eternal Press chat room (or start at http://www.eternalpress.biz/ and select Chat from the tabs). Here's the schedule:


The final new release is: 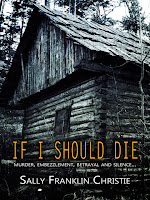 If I Should Die
by Sally Franklin Christie

Peyton Farley, a southwest Montana newspaper researcher, awakens to find a man bleeding to death on her kitchen floor. The stranger draws one last gurgling breath. As Peyton awaits the arrival of the first responders, the man’s body disappears. Local authorities accuse Peyton of murder. No sooner is she released from custody on charges of murder and illegal disposal of a body, when she is abducted by a cab driver named Tater. If I Should Die is a nonstop page-turner involving murder, embezzlement, and the ultimate betrayal.