I received word that another of my middle-grade fantasy books has been accepted for publishing with MuseItUp. That's five now and counting.

I'll admit to all and sundry that the book, "Setara's Genie," has been around the block a time or two. Here's its history, which I think is both interesting and instructive.

Way back in 2006 or so, I switched careers from writing technical documentation and programming to writing fiction. I dragged out all the half-finished stories--some of them a quarter century old--and looked them over. Was there anything salvageable? I thoughts so and proceeded to edited and fill out multiple stories. 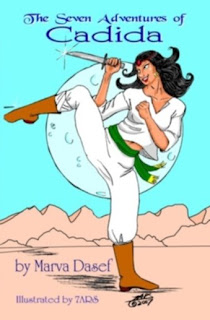 There was this story, "Cadida and the Djinn," I wrote for kids. I made it funny and sweet. The short story was published not once, but thrice. Hey, I knew a good thing, so I wrote "Cadida and the Cave Demon," then "Cadida and the Sultan's Horse." I was on a roll, and ended up with "The Seven Adventures of Cadida." It was published as a print book by a small press. I let it run its course in print, then decided to smooth it into a novel. How do you do that with seven separate tales? I had always thought of these stories as somewhat Aladdinesque or 1001 Arabian Nights style. I captured the whole lot within a frame story using an old story teller in a bazaar earning a few coins by relating the tales of the adventurous girl and her genie. I had pulled the character names out of the air when I first wrote the stories. I decided to get a little bit authentic to middle-eastern mythology and selected Arabic names for my characters. The book became "The Tales of Abu Nuwas" and I self-published it since very few publishing houses want reprints.

In the meantime, I'd written and sold a few other books to my current (and forever) publisher, MuseItUp Publishing. A small Canadian startup press, I was immediately drawn to the friendly atmosphere created by the publisher (Lea the Wise), all the editors, cover artists, and the authors. We do think of ourselves as a family. It was such a warm, inviting atmosphere, and I had an excellent experience with my first book with MuseItUp (a murder mystery). I had no hesitation sending Lea the Witches of Galdorheim series. All three books were accepted, the first published in October, and the other two in the queue for January and April 2012.

While perusing my contract, I noticed the clauses about making sure that if a work was previously published that the author had all the rights returned. Ah ha! MuseItUp did reprints! Happy me! I sent off "Setara's Genie" explaining that it had been round the block a few times, but still had some spirit in her. Matter of fact, she was better than ever with the help of my fantastic critique partners (especially Liz Brenaman and Lorrie Struiff).

As you might be thinking, I do have a recycling policy in effect. If I can sell a story once, why not moosh it about a bit and sell it again, or put it together with some other stuff and sell that.

One thing I have never, ever done is leave any of my stories unpublished. I am confident that my stories are good enough for publication, so I make sure that they are published. With the new wonders of ebooks, all sorts of writers--good, bad, and ugly--are self-publishing. I fail to see that as a crime. It's annoying to have to shuffle through the vast numbers of books and stories looking for something with a modicum of story value and a reasonable grasp of grammar and punctuation. That's what sampling is for. You can snag a chunk of a book. Possibly waste a half-hour deciding it sucks, and you're not out a dime, just a bit of time. On the other hand, you might find the newest best writer in the world. You never know.

I will never claim to be the best writer in the world. I'm awestruck by some of the talent I see out there, and that talent is not always published through the traditional routes. I know by my own experience that it's a frustrating business trying to get one of the few slots available with an agent, and then have that agent actually sell your book to a publisher. That frustration has led to a tremendous upsurge in ebook self-publishing. Heck, it's really easy to do. Yes, a lot of it's dreck and why should you waste your time searching for a few gems amongst the slush? Because that's where you find gold. In the mud, sluiced out of a creek bed, a few little sparkles catch your eye. All that mud dredging becomes very worthwhile.