A Preview of Midnight Oil

I haven't got a specific date for the release of Book 2 in the Witches of Galdorheim series. I haven't got a cover yet. But I have seen a first proof from wonderful cover artist Kaytalin Platt. Of course, I can't show you the rough draft. No. Argue all you want, it just wouldn't be ... okay, maybe just a teensy peek at one section. Mind you, it could change before the final.

Kat discovers that an evil forest spirit has kidnapped her brand-new boyfriend. She sets out with her brother, Rune, from her Arctic island home on a mission to rescue the boy. Things go wrong from the start. Kat is thrown overboard during a violent storm, while her brother and his girlfriend are captured by a mutant island tribe. The mutants hold the girlfriend hostage, demanding that the teens recover the only thing that can make the mutants human again–the magical Midnight Oil.

Here are a few more images I've been collecting for creating the book trailer. Hang on for a wild ride following Kat and Rune on separate adventures that converge into one crazy finale. 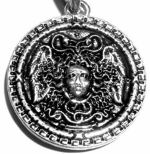 Mordita is always watching out for Kat. When Kat, Rune, Nadia and Ivansi set out to return Kat's frozen father to Siberia, the ancient witch gives Kat a good luck token. Kat wonders how an image of Medusa could possibly be lucky.

Tossed into a stormy sea along with her father's icy coffin, Kat tries to call for her old friend Salmon the Orca for aid. Alas, Salmon is nowhere to be found. Instead, an unlikely legendary creature comes to her rescue.

While Kat is floating atop a large ice cube, her brother and grandfather are sent in another direction. The storm pushes them to the shores of Novaya Zemlya, an island forming the northern end of the Ural Mountains.

The unfortunate Nenets tribe were victims of Soviet nuclear testing during the cold war. Problem is that nobody bothered to tell them to get off the island. The radiation affected the newborn children making them mutant outcasts of their own people.

When Rune and Ivansi show up, the Nenets see an opportunity to obtain the magical healing Midnight Oil. The mutants can't seek out the oil themselves. They are not allowed to ask the Nenets gods for directions. Ivansi is a Sami, a close cousin tribe. He should be able to find the location of the Midnight Oil: In Finnland's forests in a root cellar. Well, sort of a root cellar, if you think of tree roots and the word cell.

Rune and Ivansi begin their journey to recover the oil from a forest elemental spirit, Ajatar. Little did they know that the evil elemental has kidnapped Kat's boyfriend, and is holding him hostage.

In the meantime, Kat is trying to find a way to reach her mother for help. The sea serpent's island is sadly lacking in telephones, so she has to find another means of communication. Atop the volcanic dome of the island, she enlists the aid of a greedy sea bird, who is more than happy to help out if provided a lifetime supply of eggs. Kat can only hope the big bird lives up to his word and brings help.

Buy the book when it's released in January to find out what happens next.