With my granddaughters, no trickery is necessary. Haul out a camera and capture the perfect model for Faizah, a farmer's daughter called on by the goddess Anahita to lead the battle against Dev the god of war. Audrey wins the role for her dark beauty. Sorry, Janae, you're just too blond and Nordic for the role of a middle-eastern girl. I'll check around to see if anybody needs a Valkyrie for their book cover.

Coming next spring from MuseItUp Publishing:

Faizah's Destiny
The gods are at war and only a farmer’s daughter can save the world from Armageddon. 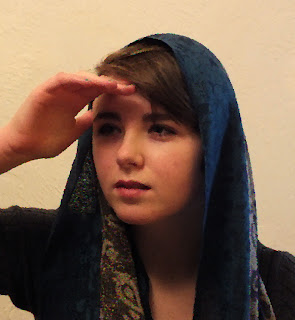