What's in Your Wall...Fantasy Book?

When I explain what my series starring Katrina the teen witch is about, I usually end up facing a person with a puzzled look and slight smile. This means they haven't a clue what I'm talking about. Now, if they actually read the books, it's not all that hard to figure out. I don't even use (too many) strange names, and the setting is right here on good ol' contemporary earth.

Maybe simple lists of characteristics would be easier to understand. Since the series is a continuing story, I'll toss in things from all three books. Randomly, without explanation.

Settings: An island in the middle of the Barents Sea, Siberia, a Finnish Forest, the marshlands of northern Scotland, Otherwhere, the lost island of Ultima Thule, the Hall of the Mountain King.

Now you know why it's hard to explain the books in a brief conversation. 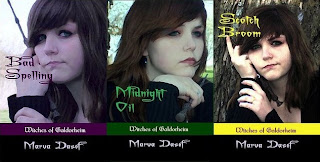