Scottish Legend and Myth – The Bodach

I had a terrific time researching Scottish mythology for "Scotch Broom, the 3rd book in the series. I thought I knew a lot already being a fantasy fan and general myth and legend geek, but I was delighted to find a few beings to add to the Scotch Broom plot. Some of these lovelies became major players in the book. Sianach, the flesh-eating stag, Cusith the giant green hound, Cait Sidhe the cat fairy, to name a few. But I also found some irresistible characters I just had to work into the plot. 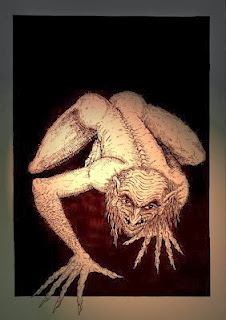 One that intrigued me was Bodach, the black giant. Once I had decided that Cailleach, the winter goddess, was going to be the villain, I decided she had to have a minion or two to do her bidding. The skrats were perfect to be the illusive little spies who reported back to Cailleach whenever Kat or Rune met someone in the Otherworld or made progress of some kind.

However, the crone would need some muscle to back her up. Bodach provided that. He’s not too bright, but is grateful to Cailleach for allowing him to live in her firewood box. Since it’s rather small for a giant, I allowed that Bodach could be just like me when waking up in the morning. Throw the legs to the side of the bed, then struggle to stand, creep slowly for the first few steps, but begin to work out the kinks. Stand up straighter, and grow taller. Finally, at full height and strength, stride off as the giant one is meant to be.

This is how I envisioned poor Bodach. A useful tool for Cailleach, kept in a woodbox, and taken out as the hag has need. I even found one reference indicating the Bodach was Cailleach’s husband. How more beaten down and subservient could a legendary being be then to be the spouse of a nasty old hag like the winter goddess. Indeed, their home is in a stone hut in Glen Lyon in Scotland. So, there you have it. A home, a husband, and a kid or two. Cailleach was the very model of a not-so-modern Scottish housewife.

The word ‘Bodach’ roughly translates as ‘Old Man’, and his favourite hobbies include crawling down chimneys and poking young children with his long bony fingers. Like the Bogeyman, the Bodach is said to steal away naughty children Specifically the Bodach-Glas, or Dark Grey Man (sometimes also known as the Dovach or Mournful One) and the Bodach au Dun or Old Man of the Hill were said to be heralds of death. These Bodachs are said to sometimes be swathed in a long grey cloaks and to hover slightly above the ground. Furthermore a tremendous gash cut across his pallid face dripping gore onto his beard and long, hoary hair.

My Bodach differs from this description. However, those who know me understand that I take every civilization’s myth and legend and then turn it to my own purposes. As always, I have taken great liberties with Celtic mythology.