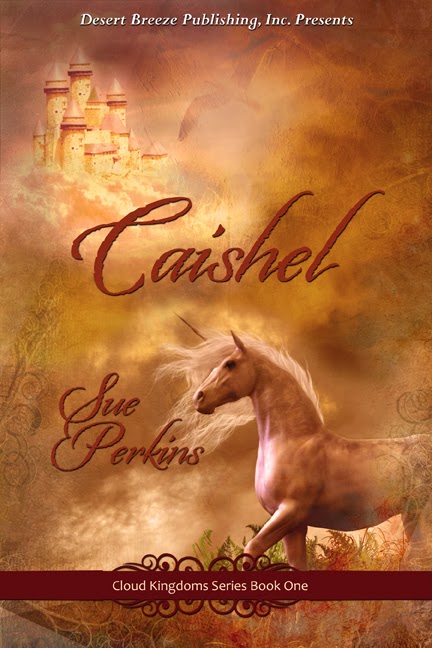 
Leave a comment to enter to win a free copy of Caishel.

Today Sue Perkins has brought along Caishel, the heroine of the first book in the Cloud Kingdoms series. Good morning ladies. Caishel, I understand you lived your teenage years as a street urchin. Can you tell us about this?

C: My parents died in an epidemic when I was twelve. I had no other family and had nowhere to live, so I took to the streets.

M: You dressed as a boy. Is that correct?

C: Yes, my father always said women didn't survive in Ardville without a male protector. Now I'm older I know what he meant.

M: How did you manage to conceal your body as you grew up?

M: How did you meet Sire Ailan?

C: I ran into him, literally. I'd stolen a fruge, that's a sort of apple, and the stallholder chased me. Sire Ailan blocked my way and I didn't see him until it was too late. Later the same day I met him again and he offered me a job as his page up in the castle in the clouds.

M: Did he know you were female?

C: Not right away, but he soon found out. He didn't tell me he knew though. He wanted to keep me safe and letting me continue as his page was the best way to do this.

C: I managed. The other pages didn't like me. They were all sons of Sires or minor nobles so they went out of their way to trip me up, get me into trouble with tutors and lots of other things. I soon sorted them out though. To be quite honest I enjoyed getting the better of them.

M: What was the best thing about being a page?

C: The best thing about being Sire Ailan's page was his nahar. Garlon is such a beautiful animal and gentle, yet fiery when necessary. I got to ride him when the groom was too busy.

M: Now things have changed for the better for you? Would you tell us how?

C: I don't think I should (glances at Sue who shakes her head). No, I'll just say my life now is wonderful, but I can't tell you or I'll spoil the book for you.

M: I see. Well thank you Caishel and Sue for visiting today.

A white, wispy figure flitted through the edge of the trees. The spirits seldom spoke directly to her, but their goodwill came across when they met. Caishel slipped into the forest and headed for the clearing where the Eos were normally found. This would be her last chance to say goodbye. Patiently sitting on a tree stump, she waited until the misty, insubstantial creatures appeared. Their large dark eyes looked depthless against the pure white of their clothes, skin, and hair. Silently they surrounded her, waiting for her to speak.

In an uncharacteristic gesture, one of the spirits reached toward her and her hand moved in response, but the other's arm quickly withdrew.

"I'm going to live up in the castle," Caishel paused. It could be dangerous to ask about the one who'd pushed the urn, but they might know what had happened. "Have any of you been into the town today?"

The spirits looked at one another and then back at her, slowly one of them shook its head and Caishel sighed.

"Someone who looked like an Eos pushed a heavy urn onto a noble. It appeared out of nowhere, pushed the urn off the overhead bridge, and disappeared as quickly as it had come."

Her words produced an unusual response in the spirits. They looked quickly from one to the other in silent communication, and Caishel guessed they were talking telepathically. The one who had offered her its hand approached her again. Carefully, it placed a hand on her shoulder and Caishel looked up into the beautiful dark eyes.

Please tell us exactly what you saw. No sound came from the creature; the words were in her head.

"I guess it's okay if I speak out loud?" The creature nodded. "I saw a flash of white and looked up in time to see a figure appear on the bridge. It turned solid, pushed the urn off the bridge then disappeared again."

We believe this to be a member of a long lost sister tribe and would like to re-establish contact with them. Would you be able to communicate should you see this being again?

"I'm not sure, but I doubt if I'll have the chance. It's not likely to come up to the castle." A glance through the leaves overhead showed the sun's position and Caishel knew the time had come to leave. "I have to go now, but I'll try and do as you ask."


Sue Perkins and her family emigrated to New Zealand many years ago. She lives with her husband live on a three acre property at the top of New Zealand’s South Island. Her interests include writing, reading, genealogy, going to the gym and aqua aerobics. Sue’s first writing love is fantasy, and this is for adults, young adults and children. She also writes contemporary romance books. Her aim is to write a full length epic fantasy novel. The outline is complete, and Sue's hope to finish the first draft in 2013 failed, so she is going to try for the end of 2014.

Visit Sue's website for more about her wonderful fantasy books.

Leave a comment to enter to win a copy of Caishel.