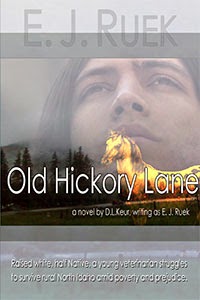 My friend, EJ Ruek, has a fantastic book for sale titled "Old Hickory Lane." I reviewed it and posted my review on this blog a few days ago. Since I know EJ, we started a dialogue about cross-posting. She wrote up a really fun post on riding a broomstick to Galdorheim Island with me (related to my Witches of Galdorheim trilogy). I replied with a bit on one of her characters, Ed the Bantam Rooster. I imagined what the rooster was thinking in her book. Visit EJ's blog, The Grimace and the Giggle. In the meantime, here's what I wrote about Ed the rooster.

Cocked Tail turned his beady, black eye toward the sound and saw the dust billowing a short flight down his wide path. Most of the time, the big things humans rode were loud enough to give him plenty of notice. Lately, though, a new type of mount could come on him before he could complete the journey from one side of his path to the other.

This mount was a noisy one, and big. Cocked Tail knew it belonged to one of the humans who came to take care of Annie’s big animals. Judging the distance and time available, the bantam crossed the road to get to the other side.

Why would he want to cross the road? Why to let loose the white hens who followed him wherever he wanted to go, of course. Mostly, he wanted to go to the hilltop where the golden horse came just as the sun set. Even a brilliantly beautiful creature such as himself with his iridescent green and blue feathers could admire the ghostly stallion. When the horse appeared, it meant good luck for Cocked Tail. The next time the rooster raided the hen house, the farmer wouldn’t be around to yell and throw rocks.

He dashed three strides, spread his wings, and soared across just before the human’s mount rounded the corner. The dark-haired human rode inside. Cocked Tail knew him well. He first came to Annie’s some time ago. Cocked Tail teased the dark man by grabbing things from his hand. The man grabbed back, but, as usual, Cocked Tail won the game. When the man made a soft crowing sound, Cocked Tail knew the man was a friend. After that, he let the man come and go as he wished.

Landing on the far side of the path, Cocked Tail turned to watch the approach of the mount. The dark man’s eyes met his. Both dipped their head in a sign of respect. The man’s mount roared on, and Cocked Tail turned back to his business. He had a flock of fair hens to rescue.

Think "All Creatures Great and Small," but with a plot, some mystery, and maybe a ghost. Set in a near future 'now' and marked by moment-to-moment, life-and-death crises that are a practicing veterinarian's life, meet Warren Jeffreys, D.V.M. Raised white, half Cree, he's gifted with animals, but not very people savvy. Struggling to survive his first year in private practice, despite the huge chip on his shoulder, college debt, and a plague of bigotry and prejudice, his bad luck and worse judgment lands him broke and homeless, camping out with vagrants and vagabonds. He's cleansing cows and cutting up dead lambs inside bawling ewes—an animal mechanic working for a small-time veterinary service in rural North Idaho. As his hopes for prestige and preeminence buckle under the rigors of day-to-day practice, he finds a new dream—a reconciliation to home and family—and with it comes a certain peace…until, once again, as fame and fortune tempt, he faces hard choices. Filled with intense, critical emergencies, all of them based on true cases, the book has been “vetted” by modern, practicing veterinarians. It's the animals that make you really pull for Dr. Warren Jeffreys, because, despite his best attempts not to, he cares. A lot. And, because he cares, because he competes against death, regardless the odds, he makes a difference. Unfortunately, the often cantankerous farm folk he serves don’t always appreciate his efforts and skill. Nor do they trust him, the "too tall, long-haired Injun." Warren truly is a man without a home, with a foot in two worlds, but welcome in neither until he learns to trust his own heart.