Hero in a Wheelchair

A Tribute to His Dad by Stuart West

Memorial Day has come and passed. This year I didn't make it out to my dad's graveside. The weather, prior obligations, blah, blah, blah, and other excuses prevented me from going.

The truth, though? I don't like to visit the cemetery. I prefer to remember my father as the living giant he was. Larger than life and twice as full. When Multiple Sclerosis struck him down, he never nestled into depression, instead choosing a higher path. Even though confined to a wheelchair for a good portion of his life, Dad managed to raise three boys, doing so with humor, strength and compassion. Once, in a rare mood of melancholy, he apologized for not being able to toss a baseball back and forth with me. I said, "Dad, hello! I hate sports. That doesn't matter." He just smiled. A man of few words, we both understood, a silent acknowledgement of our mutual love.

So when I go to his graveside, all I see is a patch of grass. Not the man who meant so much to me.

I commemorated his life in my Tex, the Witch Boy trilogy. A what-if scenario, almost. Tex's dad suffers from MS, yet still maintains a functionally happy existence, a strong guiding force in his son's life. My dad would be doing the same thing for me if he still lived. And he does. His spirit lives on in my books, doling out wisdom and, of course, fatherly angst about stupid teenage mistakes. Being a parent now, I totally understand. Just wish I could tell him so.

The Tex trilogy goes out to you, Dad. Love you. Miss you. Happy Father's Day to all fathers past and present. 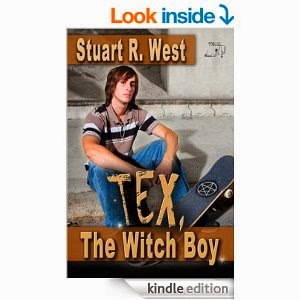 Being in high school sucks. Just ask Richard “Tex” McKenna, a Kansas sophomore. Dealing with bullying, burgeoning love, the loss of parents, and dodge ball is bad enough. To top it off, he's just found out he's a witch! Oh, and fellow students are being murdered. The suspicious eyes of local law enforcement are looking right at Tex and his loyal group of friends. And so is the killer. Will Tex's new-found skills prove helpful? Or cause even more problems?


TEX AND THE GANGS OF SUBURBIA (Book 2) 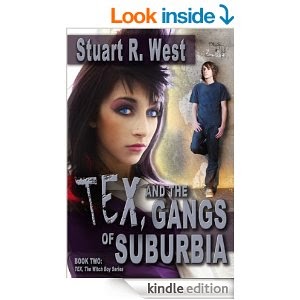 Tex McKenna’s junior year of high school is just as bad as his sophomore year. Maybe worse. Olivia’s dumped him. He's caught up between two warring gangs and gone “undercover” with the Modern Gangstas to unmask a murderer. All this poor Witch Boy and supernatural trouble magnet wants to do is end the school year alive. And maybe find out who the mysterious punker girl is and how she knows all his secrets. 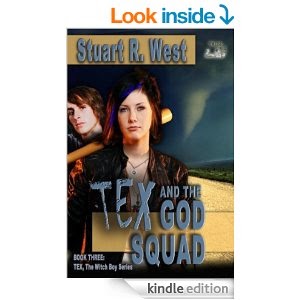 Richard “Tex” McKenna's graduating high school. It’s a shame he doesn't have a clue what comes next. There's no time to think now, either. Being a male witch makes Tex a ginormous supernatural trouble magnet. There's an angry witch in pursuit and a maniac in a Grim Reaper's costume on the loose. Why did the cheerleader really kill herself? Is the heinous Clarendon Baptist Church a front for something more sinister? Elspeth’s back, too, trouble trailing on her booted heels. If Tex and his friends don't figure it out soon, Tex won't have to worry about life after high school.