Here we are three on four (depending on whether you're a 7th Day Adventist) into the week, and I almost missed the fact that it's Pirate Week. How could I have been so remiss?

So, just to stay trendy, here's a nice picture of Cap'n Jack Sparrow, the current Pirate Du Jour. I've loved Johnny Depp since he got past 22 Jump Street. After that, it was all good. I'd say the most innovative and creative actor in this decade and we're only half-way through. Since I've been working on a Disney-based kid's book, I've got to think about Cap'n Jack a bit while I was waiting for the opening of the new, improved Pirates of the Caribbean at Disney World. 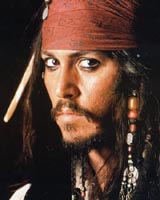