JoJo is the leader of the Eugene (Oregon) chapter of the Willamette Writers Group. I thought it would be nice to hear from her since the details on the WWG Conference 2007 is just appearing on the WWG website.

Check it out! Especially that huge list of agents and editors who will be available for pitches. You'll have to sign up early to get the one(s) you want. There is a fee, I'm afraid. But not much in life is free.

Marva: Hi, JoJo. Thanks for answering a few questions. I know that you're the Grand Poobah of the Eugene chapter of the Willamette Writers Group. This is in Oregon for the geographically-challenged. We'll get to that in a bit, but first tell us a little about yourself.

JoJo: Thanks for having me—I love talking about writing!!

I started writing more than ten years ago when I woke up one morning with a book idea in my head that wouldn’t go away. I had written marketing, sales and pr materials in my business life, but had never even considered writing as something I could do. 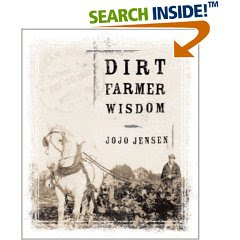 Five years later, my book Dirt Farmer Wisdom hit the bookstores. My book is about family wisdom and language passed down from generation to generation that was used to teach, motivate and inspire my family to reach for our dreams. Phrases like “You can’t catch water with a fist,” and “Kill the closest snake” are just some of the gems you’ll find in the book. Published by Red Wheel / Weiser in 2002, it is still in print and available!

A big surprise came when I discovered that a quote from my book made it to the pages of Reader’s Digest’s in the section, “Quotable Quotes.” Huge thrill—big honor.

I don’t have a web site yet—I’m working on it. Jojojensen.com will be the address, so I hope your gracious readers will check back with me in the future!

With regard to Willamette Writers, I am the new Coordinator of the Eugene Chapter and have an awesome team of people who have stepped up and volunteered to help me run the organization with style and flare!

Marva: You've been a member of the WWG for a while. What benefits did you get from being a member?

JoJo: I moved to Eugene in May of 2001 and the first thing I did was join Willamette Writers. At $36.00 per year, it’s a screaming deal with free entry to the monthly speaker’s series and a discounted rate for the annual conference in Portland.

The speakers, regardless of genre, always have a nugget to impart that will improve everyone’s writing skill, from Cara Black’s information about using sensory details beyond just the visual to add depth to your writing to Jerry Oltions’s insight about using the “what if, if only or if this goes on, then…” elements to form the foundation of your story.

The bonus of joining Willamette Writers is that you get to meet some really great people and find support for your love of writing! You can meet and talk with other writer’s who know what you are going through whether you are just a beginning writer or a seasoned pro with many titles under your belt.

As a writer, you have to do the work alone, but it really helps the process when you can call on someone for support or ideas when you get stuck. It also helps to have allies when those inevitable rejection slips start rolling in. Writing is hard work—and with groups like Willamette Writers, you don’t have to do it alone.

Marva: You're an energetic person to say the least. What made you decide you wanted to take on the leadership role in the Eugene chapter?

JoJo: Thank you—I will embrace “energetic” as description of me!

Let me give you some background of the two women who have been running this chapter for the last seven years.

Patsy Hand decided to start this group to bring area writers together and Valerie Brooks volunteered to help her out. Together, they have done an amazing job bringing in a diverse range of speakers from screenwriters to best selling authors to literary agents, all with the aim to educate members to become stronger, more skilled writers.

Having been a member since 2001, I jumped at the chance to be part of this amazing, state wide group and am lucky enough to have time to devote to this venture. But…I’m not in it alone!

Pat Sweeney, my co-coordinator, is in charge of all things email. So if you want to receive our email info—she’s the gal to contact: pswilwrite@earthlink.net.

Sarah Decker is our very own graphic designer who does our chapter newsletter called the Hot Sheet, pulling together the content which includes announcements, classes, workshops, book signings and even services for writers, such as editors. She is also keeping track of the people who want to have a pitch practice before the big Willamette Writer’s conference in Portland in August.

I’m lucky to have found such terrific people who will help me continue what Val and Patsy started.

Marva: What's on the agenda for future meetings or at least what direction do you want to take the group?

JoJo: For the 2007-2008 series we have some great people lined up to speak from two successful screenwriters to well known literary authors and we will have a writer speaking on the delicate balance of ghostwriting! I have a couple of months yet to fill but we will release our schedule as soon as everyone is booked.

I do have some thoughts on what direction to take this group. First I want to build on what Patsy and Val have already done so beautifully—we just want to grow it! The Hot Sheet was the first thing we got going and we are kicking around the idea of our own website! It is also my mission to entice writers aged 20-50 to join us—I know you’re out there. I am also open to ideas and suggestions for what people are looking for—if two heads are better than one, then 4,000 heads must be amazing!

Marva: I understand that Willamette Writers is hosting a Writers Conference in August in Portland, Oregon. Tell us about it.

JoJo: From personal experience I can tell you that the conference is a MUST do for any serious writer! Not only are the classes and workshops first rate, but all the agents, editors and film people they bring in are a phenomenal way to network, pitch and get your name out in the publishing/film world.

For all the details on the classes, speakers and people whom you can pitch your manuscripts to, go to the WWG conference site. My only advice: sign up early for the pitch sessions because they go fast. The maximum is six and I suggest to everyone, sign up for as many as you can get.

Another piece of advice—practice pitching your story to someone who doesn’t know anything about it—so that your pitch is clear as a bell and you are prepared for any questions that the agent/editor/producer might ask.

My last piece of advice—I promise—Be Bold and have fun!