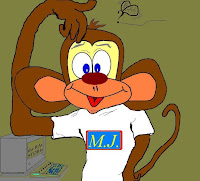 I'm very excited to present this interview by an unusual childrens' book author. MonkeyJohn sprang from the imagination of John Bushore. John's latest book, writing as himself is "Friends in Dark Places." You can read my review of the book here.

MonkeyJohn, the only primate native to the Great Dismal Swamp, lives with his friend, John Bushore, occupying the penthouse suite of the Top Banana Building. He is the author of the children's book, "What's Under the Bed?" and former editor of MonkeyJohn-dot-Banana, an internet children's magazine. His short stories and poems have appeared in KidVisions and the quarterly print magazine, Beyond Centauri, including the "SpaceMonkey" series.

John will be at Ravencon, April 20-22, in Richmond Virginia. I assume he'll be bring MonkeyJohn with him. If you live in that neck of the woods, drop on over.

Marva: Hello, Mr. Monkey or is that Mr. John?

MJ: It’s one word. I’m the only monkey in the Great Dismal Swamp, the top banana so to speak. I don’t need a last name.

Marva: Let's get down to business. You live at the edge of the Great Dismal Swamp with John Bushore. Do you give him kitchen privileges? Okay, just kidding about that. I'm sure you treat him very well. I assume you were precocious monkey, so what was the first thing you wrote?

MJ: John Bushore, a writer of novels, moved to a house on the edge of the swamp a few years back, was moved to write a poem by the 9-11 tragedy. He found, to his surprise, that he enjoyed writing poetry, that it was fun. He would wander around his property making up silly rhymes and I’d come out of the swamp to listen to him. Eventually, I learned to tolerate him.

John (or Hey, You, as we call him around here) sent in a poem called Mare Insanitatus and it became published in the Martian Wave, his first acceptance ever. Well, I couldn’t let Hey, You one-up me, so I wrote and sent in a couple of spooky poems when Mr. Tyree Campbell put out a call for submissions to the December issue of his magazine Kisses for Kids. This was in ’02.

Marva: How did you decide to become a children's book writer? After all, your room mate, John, writes some pretty scary stuff.

MJ: Well, Mr. Tyree Campbell (my hero, by the way) accepted those two aforementioned poems and said maybe he’d do a special Halloween issue the next year. I mentioned that I’d like to do a book of poems someday and Mr. Tyree Campbell said, “Hey, I’ve just become a publisher, let’s do it.” I bluffed and said I had bunches of poems (I just didn’t mention they were all still in my head.) So I wrote a few dozen poems and Mr. Tyree Campbell selected several to put in the book, which became “What’s Under the Bed.” Which is how I became a PUBLISHED AUTHOR long before Hey, You did. 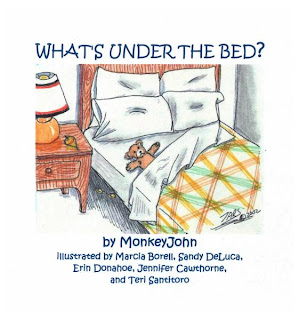 MJ: Um, it’s a little bit of everything as far as kid’s poetry goes, but it pretty much has a fantasy theme. There’s dragons, unicorns, a haunted house in a carnival, and it really does reveal what’s under the bed. Most of the poems are pretty funny and parents say they enjoy them as much as their kids do.

Marva: What is a picture book exactly?

MJ: I can answer that easily, seeing that I’m in the publishing “Biz” as we call it. It’s a book of simple prose or poetry, accompanied by drawings that “illustrate” the text. Books from major publishers are almost always 32 pages in length, with the first two pages reserved for title, credits, etc. Surprisingly these publishers don’t pay their authors in bananos (the Euro of the Dismal Swamp.)

Marva: What do you have coming up next?

MJ: I have a new picture book manuscript called “The Lost Ginger Whale,” a book-length poem telling how the Sand Witch and the Cat o’Nine Tales search for their friend Ginger Whale who has left their beach home in search of whatever lonely whales search for. They meet up with such characters as the great crashing boar, the dark horse and his mayor, a loan shark, kissing grammys, and Billy the Fish (who’s rather dumb because he never went to school.) Despite numerous clues, they can’t find Ginger, and they are sad. But then Ginger comes swimming up out of the depths and she brings a surprise.

I’m also adapting some of my “SpaceMonkey Adventures” for picture book format.

Hey, You will be sending out queries soon, since he handles my mail and keeps my swarms of adoring fans away by using fly spray.

Marva: Do you do your own illustrations or do you have a stable of illustrators chained in the basement? If so, would you tell us who they are so their families won't worry about them?

MJ: Since you brought it up, we do have a stable, which contains 3 horses, 24 hens, 1 very lucky rooster, and the Spanish Black Turkeys, Archie and Edith.

But I do NOT have illustrators chained in the basement. First off, we don’t have basements here in the swamp because they’d flood and then we’d have to call the alligator exterminator. Secondly, they keep the illustrators in Mr. Tyree Campbell’s basement where this guy without a name, J, comes by and whips them now and then. The illustrators for “What’s Under the Bed” were Marcia Borell, Sandy DeLuca, Erin Donahoe, Jennifer Cawthorne and Teri Santitoro. And the cover was done by another person without a name, 7ARS. (I think she’s related to R2-D2)

Marva: What else would you like to tell my readers? Anything at all! Go!

MJ: Why are you calling me MJ? If you’re not careful, I’ll lose my name like J and 7ARS.

Marva: Sorry, I wish you'd said something at the start of the interview.

MonkeyJohn: There was once a very young boy who dearly loved spending time with his Uncle John. But then his older brother and cousins told him that all people are descended from monkeys and the man he called Uncle John was really MonkeyJohn, the monkey everybody came from. The young boy believed them and called his uncle MonkeyJohn from then on.

And it’s true; MonkeyJohn is the progenitor (betcha didn’t think a monkey knew a big word like that) of all intelligent life. He also wrote the very first poem:

A fish walked from the sea one day,
while I sun-bathed at the shore.
I was surprised to hear him say,
“My feet are really sore.”

“My legs appeared a week ago,
and I really was surprised
to find myself evolving so,
before my very eyes.”

And then he said goodbye to me,
for he wished to see the world.
He said he hoped to climb a tree,
and turn into a squirrel.

But as he left, he warned me, too.
“Don’t you stay ‘til after dark.
I’d leave the beach, if I were you;
behind me walks a shark!”

Marva: Thanks for swinging by, MonkeyJohn. Say hi to John from me.

MonkeyJohn: Whew, being interviewed is tough work. I think I’ll wander into the swamp and eat some marsh mallows. Thanks, Marva. As we say in the publishing biz, “Toodles.”