This interview appeared originally in FilmFiler.com in March 2006. That site has sadly disappeared and maïa has allowed me to reprint it here.

If you have ever frequented any writing forum then you may well have been helped out by the mysterious maïa. As well as being incredibly helpful and approachable, she has her own site saysmom.com where you can view her essays and find out more about her thoughts and opinions. I asked her some questions to help new (and not so new) writers get started out.

Why did you decide to provide free mentoring to writers?
I can’t really remember when the idea struck me, as it was about 5 years back. Around 5 years before that, when I gave away all I owned, I’d decided to do nothing for money ever again, and wanted only to be useful in some way, for as long as I was stuck in this life. The thing I do best is write, so that seemed the best way to be useful. I had already been offering to help with any kind of writing and computer set-ups/organizing wherever I went - to homeless shelters, the Hopi tribe I lived among for a while, and kids in the South Bronx ghetto who were trying to change the world, among others. When I started house and pet-sitting, to provide a roof over my head, doing the same online seemed a natural segue.

What are the most common questions you are asked?
The 3 most common are probably: 1. ‘Is this any good?’; 2. ‘Will you please edit this for me?’ and 3. ‘How can I get my work published/produced?’.

1. pretty much speaks for itself. They’ll send a piece of work and ask if it’s good enough to send out or worth continuing to work on, and/or want to know if they show any promise at all as a writer, or not.

2. also is pretty straightforward. I’ll be sent a poem/story/article/essay/book excerpt or whatever that the writer knows needs ‘fixing’ in one way or another and knows he/she can’t do it her/himself. Sometimes only a bit of typo and other simple error catching is needed, but other times, up to a complete rewrite is called for. I don’t do people’s work for them, but do show what’s wrong and why, and suggest ways to /correct/improve it.

In re: 3 sadly, I often have to deliver the awful truth that the piece in question just isn’t marketable. In the cases where it’s not completely beyond hope, I’ll offer suggestions as to how to proceed, and send along tips from the pros that I’ve collected over the years.

What qualities should a writer aim to develop?
First, of course, the basic skills (grammar, spelling, punctuation, syntax) must be learned and honed to a professional level. Next, is an eye and an ear for being able to tell what is ‘good writing’ and what is not. This can only come from lifelong and constant reading of the best works by the best writers of all time, as well as those who are the most respected in today’s literary world - which does not mean the most popular! Along with the best, one must also sample the not so great and the actually awful, to be able to see the difference.

Should a new writer talk about what’s close to their heart or what will get them noticed by others?
There’s no one answer to that question - it depends on what they are writing and what they want to do with it. A good, seasoned writer will do both, naturally. I find that most new writers tend to place too much importance on one or the other, instead of just settling down to write the best story/book/whatever that they can. In the end, it’s only the writing that matters, not the writer.

Why do you not help writers who include violence in their work?
That’s not really accurate. I’ll help anyone, I just won’t help with any ‘work’ that contains violence. I work with many who first came to me with writing that had violent content and, after being told I can’t help with it, came back with things I could help them with. Basically, I won’t aid and abet using violence to entertain people. The reason is too involved to deal with here and can be understood better if one reads the essay ‘Why your money’s no good’ on my website.

Are there any other things which you think devalue the work of a writer?
Oh, sure. Poor skills heads the list! The excuse that what they’re saying is more important than how they say it doesn’t wash with me. A good writer will write well–period. Proselytizing also cheapens writing, often ruining what could’ve been a good story, if the writer wasn’t trying so hard to convert the readers. And, just tossing off cheap copies of their own work also annoys the heck out of me. ‘Pancake writers’ is what I call the Bob Ludlums and Stephen Kings and J. K. Rowlings of the publishing world’s heights. Believe it or not, I got the term from Ludlum himself, when I knew him back in my old life. He doesn’t kid himself, he established a good, best-selling format and just stuck to it. All he has to do is change the location and the name of the hero, keep up with the world news–et voila!–the latest NY Times best-seller.

You have some ‘works-in-progress’ on your site, how often do you work on these?
Not at all. They’ll most likely remain in w-i-p limbo forever.

Will you aim to get these published in other media than the internet?
No. Having long ago divested myself of ’self’, I ‘aim’ for nothing, let all happen as it will. If any of my work is meant to be published, it will be. Since I don’t do anything for money, I can’t very well sell it, can I? I’ll occasionally send something to a freebie e-zine, if it catches my eye, but I don’t go looking for anything.

What lies ahead for maia?
I’ve no clue, writing-wise, that is. I write what comes to me, what ’speaks’ to me and needs to be written/seen/known. I’m a philosopher first and foremost, studying and recording the behavior of this supposedly ’superior’ species seeming to be my main ‘assignment’. The writing help/mentoring is just a time-filler, really.

Aside from studying, writing and mentoring, I’m finally able to give up the house and pet-sitting [also done for free], and can have a place of my own to finish growing old in and enjoy being a hermit, which is how I’m most comfortable. I’ll be heading for the island of Tinian on December 20th (2006) and will most likely never leave there (bodily, that is). A woman asking for writing help dropped in my lap just as I found I couldn’t stay beyond a year in Canada and needed to find a new ‘gig’. I can afford to live there (in the farthest reaches of the Pacific!) on my own, thanks to a deceased ex-husband’s social security, so off I go. Many of the locals there need help with English, as well as tutoring for all school levels, so I don’t think I’ll find any lack of ways to be useful.

Thanks and Good luck with the future. 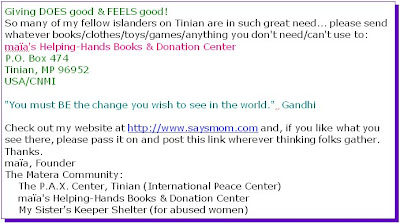