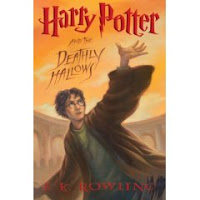 I certainly don't want to be left out of the frenzy, so here are some spoilers that I've made up on the spot. They're probably as good a guess as the other spoiler sites have posted.
Harry and Hermione have sex and Hermione gets pregnant. Hermione has to drop out of Hogwarts. But when Harry Jr. is born, he has red hair. Hmm?
Ron goes over to the dark side and joins up with Voldemort. Voldemort decides Ron is far too inept a wizard to keep in his hand-picked army of bad guys. Since he causes more problems than he solves, Voldemort lets Harry have him back, assuming that Ron will screw up Harry's chances.
The waffling Snape finally picks a side. He gives up magic and runs off with the Luna chick.
Everybody dies. Why not? It's the last book, right?
Dumbledore is the only one who survives. Yes, he died in a previous book, but they hired another actor to play him and he was reincarnated.